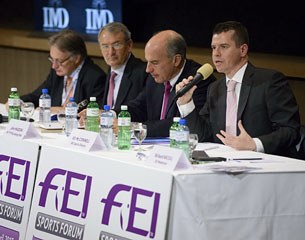 The second of the morning sessions on Monday 27 April 2015 at the 2015 FEI Sports Forum was dedicated to Olympic Agenda 2020, with IOC Sports Director Kit McConnell addressing delegates on Agenda 2020 and its relevance to the FEI.

The IOC Sports Director likened the process that the FEI is currently undergoing with its review of formats for the Olympic disciplines, to the process that the IOC has gone through with Agenda 2020. “It’s timely that we could join you while you’re focusing on the evolution of your sport, as we are on a similar pathway that the IOC and the Olympic movement have been on for the past 18 months”, he said in his opening remarks.

“The reasons you’re going through this process are similar to the reasons why we’ve gone through the process of Agenda 2020. We need to embrace change and be a driver of change, not a passenger, and we are moving forward with a completely holistic review of the IOC and the Olympic Movement.

On gender equality, the IOC Sports Director stressed that the IOC is working with International Federations to achieve 50% female participation in the Olympic Games and to stimulate women’s participation and involvement in sports by creating more participation opportunities at the Olympic Games. This involves encouraging the inclusion of mixed-gender team events and aiming for an equal gender balance across the Games as a whole.

“The FEI has been fully compliant with this for many years, but your International Federation is in a fairly unique position”, he said, before informing delegates that the numbers for equestrian in London were 122 men and 77 women. Across all sports at the 2012 Games, there was 44.4% female participation, with a goal of 46.1% for Rio 2016.

“Equestrian was an outstanding success in terms of ticketing at London 2012, with over 98% of all tickets sold across the three disciplines”, he said.

Strong media coverage of equestrian across all platforms at London 2012 also featured in the presentation. In broadcast, Jumping was well ahead of the other two disciplines in terms of hours of coverage, but Dressage was the most popular discipline online and in print media coverage.

He stressed that it is equally important for the IOC to embrace its traditions and history as it is for each of the sports in the Olympic Programme, and to look at how to embrace those traditions and make them a strength. He spoke of the unique nature of equestrian sport with the combination of horse and man, the passionate global community and the diversity between the disciplines. He also referred to the iconic locations used for equestrian sport.

“Not every sport can go to the places you can go to, where you can showcase your sport and the host, and engage spectators. It’s very valuable and very special for the sport.”

Winding up his presentation, Kit McConnell said: “The IOC values our partnership with FEI and its stakeholders and we are committed to a close working relationship with FEI.”

FEI President Ingmar De Vos was next to take to the lectern. “We are really excited by the reforms and recommendations of the Olympic Agenda 2020”, he said, “and see it as an invitation to continue a process that the FEI had already set in motion prior to the Agenda 2020 reform process.”

The FEI President spoke of gender equality in equestrian sports as “one of the key assets of our sport and a value which we are very proud of”. He also referred to the FEI’s proactive stance regarding the involvement of the Federation in delivering the Olympic Games, creating a new position within the FEI for a Director of Games & Championships which was filled by Tim Hadaway, Equestrian Sports Manager at the London Olympic Games.

“By doing this we recognised the need for more involvement and support from the International Federation to the Organising Committee in order to deliver the Games the best way possible, and this before the Olympic Agenda 2020 was established. I sincerely believe that the International Federations need to take their responsibility because in the end it’s our sport, and while the responsibility of the Organising Committee ends after the event, we need to go on and preserve our legacy.”

The FEI President then spoke about the guiding principles of the evolution of the Olympic Programme. Alongside gender equality, he highlighted increasing Games popularity and value, maximising engagement of the youth audience and increasing universality.

“I believe this is a very clear message from the IOC to the International Federations about what they have to focus on and I am happy to say that we share these principles. This is also what we have identified and one of the main reasons that we are here together at the FEI Sports Forum.”

Referring to the IOC Sports Director’s presentation around television, internet and press figures for equestrian sport, the FEI President said: “he made it very clear to us that these will be, more than ever before, the parameters on which sports will be evaluated for the future Olympic Programmes. We need to understand that these are also the parameters that become more and more important in our own sport.”

On the potential revision of formats, the FEI President talked on the two general proposals across the three Olympic disciplines: making a clear differentiation between team and individual competitions and the proposed removal of the drop score to fulfil the universality and excellence elements of Agenda 2020.

“I want to reiterate that the values of our sport are paramount in all these discussions and it’s not about changing for the sake of change”, he said. “We have our traditions, our values and our identity, but this does not mean we have to be conservative. It’s about finding the right balance and implementing the right changes without losing the essence of our sport. We need to ask ourselves, is equestrian sport too complicated for television viewers and spectators with no equestrian background? Is it global enough? Are competition formats simple to understand and exciting enough to encourage new fans?

“If our ultimate goal is modern horse sport for the modern era, then we need to address all these questions.”

In the question and answer session that followed, the issues of social media, universality, risk, International Federation groupings and revenue distribution from the Games were all debated, prior to the discipline specific sessions later in the day.