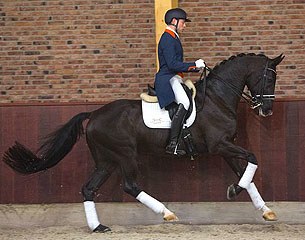 The 13-year old black Dutch warmblood gelding Hecom's Ventoux (by Ferro x Farmer) was the second best selling horse of the auction. The full brother of Jordi Domingo's late Grand Prix horse Prestige sold for 240,000 euro to the Philippines. The horse will stay in The Netherlands as the buyer trains at Anky van Grunsven's yard.

The KWPN licensed stallion Googel (by Bordeaux) achieved a knock down price of 200,000 euro. Turkish junior rider Lina Uzunhasan acquired the 4-year old Genua TV (by Charmeur) for 170,000 euro, but the young horse will first be ridden by her coach's daughter Dana van Lierop.

Brother de Jeu (by Voice) and Sir Florestan (by Sir Donnerhall) also sold for 170,000 euro. Rollo (by Romanov) sold for 70,000 euro and will be ridden by Dinja van Liere. Laurans van Lieren bought the approved High Hopes (by Wynton) for 77,500 euro.

More than 600 people were present at the auction and there was much telephone bidding as well. Horses sold to Sweden, Turkey, Belgium, Zwitserland, Great Britain, the Philippines and the U.S.A.

The average price for a horse at this auction was 59,961 euro. Six horses were not sold as they did not achieve a desired price.