FEI Votes to Change Statutes to Allow for Presidential Remuneration 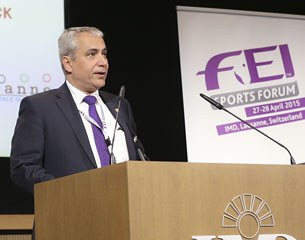 The FEI voted unanimously to modify the organisation’s Statutes to allow the FEI President to receive remuneration. The amendment to the Statutes opens up the possibility for remuneration, but the final decision still rests with the FEI Bureau

, which will discuss the issue at its in-person meeting in June.

The vote was taken at an Extraordinary General Assembly (EGA) held during the FEI Sports Forum at IMD in Lausanne (SUI). A total of 59 National Federations were on-site to register their votes and there were 27 powers of attorney, giving a total of 86 valid votes. The required quorum is 67, half of the 133 National Federations plus one.

Dr Claude Nordmann of the Swiss National Federation spoke briefly after the vote, calling for a study to be conducted on salaried positions and commenting that the contents of the study would also be useful for other International Federations.

The EGA also voted unanimously to a number of proposed changes to the Internal Regulations of the FEI, including the addition of the President to list of signatories to official documents.