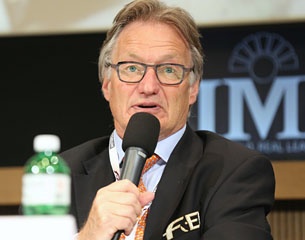 The Chair of the FEI Dressage committee Frank Kemperman presented the proposed format changes for the disciplines of dressage in the afternoon session at the 2015 FEI Sports Forum in Lausanne, Switzerland, on Monday 27 April 2015.

Frank Kemperman, Chair of the FEI Dressage Committee, opened the session dedicated to the future of the discipline by emphasising the fact that dressage is in a good position, especially thanks to the Freestyle, but there were strong signals from the IOC that change is needed, particularly the sport’s appeal to the media. Kemperman outlined the discipline’s goal to be one of the main equestrian sports and highlighted the necessity to unify formats at the Olympic Games and main championships, to attract new spectators, sponsors and generate increased media interest while maintaining the core value of Dressage, the well trained horse.

“We need to come up with a single format for Olympic Games, World Equestrian Games and Championships so that the public can more easily understand our sport”, Kemperman said. “Most importantly, we have to be open to innovation and learn how to make it better. There is a young public out there and we need them, they have iPhones and iPads and they follow everything ‘in the moment’ online - that’s their world, and we must be part of it,” he said.

A survey conducted in the autumn of 2014 by Repucom, which specialises in market research, media evaluation and commercial auditing, found that:

The Repucom survey also established that 86% of those surveyed are attracted to Dressage by its beauty, the relationship between horse and rider, the horse itself, as well as the sport’s grace, elegance, aesthetics and fun, with only 24% interested because of concepts including discipline, control and training.

Proposed changes to the Olympic Games format, which can be read in full here, were detailed for consideration by the Forum. They included teams of three or potentially two combinations, shorter tests, Pas-de-Deux or Pas-De-Trois.

The positives of these proposals were considered to be a larger number of nations, which would increase universality, and separate individual and team competitions. The removal of the drop score would increase drama and entertainment and contribute towards more unpredictable results.

The negative aspects would include a possible decrease in the level of excellence as top nations may bring fewer participants, and significant consequences for the team if a horse was eliminated or disqualified.

The proposal was also that formats for the World Equestrian Games and European Championships should match the Olympic Games format.

Greater interaction and explanations on the sport, social media, use of music during tests other than the Freestyle, length of tests, formats, quotas, open scoring, a redefined dress code, lifestyle stories, higher prize money, more attractive prize giving ceremonies and the involvement of young riders, were outlined as likely to have a positive impact on the attractiveness of the discipline.

The presentation was followed by a lengthy discussion, with representatives of the Dressage riders, trainers and organisers’ clubs, the National Federations of Australia, Austria, Denmark, Germany, Great Britain, the Netherlands, New Zealand and the United States, as well as the European Equestrian Federation, making contributions.

The main topics raised during the discussion were judging, dropping of highest and lowest scores for each movement, open versus running scores at major events, change in dress code and the increased use of social media. Protecting the welfare of the horse at all times was highlighted, and the creation of a video handbook was also discussed.