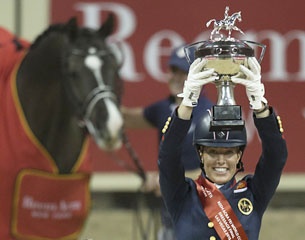 The sensational British duo, Charlotte Dujardin and Valegro, secured their second consecutive title when winning the Freestyle at the 2015 World Cup Final at the Thomas & Mack arena in Las Vegas, USA on Saturday 18 April 2015. On an afternoon of superb sporting entertainment during which the spectators played a major role, the Olympic, World and European title-holders threw down another of the iconic performances that have set them apart from the rest over the last four extraordinary years.

They came close to their world-record Freestyle score when posting 94.196, and finished almost 10 percentage points ahead of their nearest rivals, The Netherlands’ Edward Gal and Undercover who scored 84.696. Germany’s Jessica von Bredow-Werndl and Unee BB slotted into third with 80.464, and America’s Laura Graves lined up fourth with Verdades on a mark of 79.125.

Dressage has taken on a whole new dimension at the Thomas & Mack Centre this week. American spectators are encouraged to totally immerse themselves in what is going on in the ring, and they clapped and roared their approval throughout every test. It was clear from the outset today that they would be louder than ever, but the horses and riders rose to the challenge, and many revelled in it. 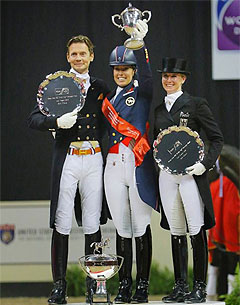 Denmark’s Mikala Munter Gundersen and her 15-year-old mare, My Lady, set the arena alight when sixth to go, their musical score carrying the audience with them all the way and ensuring the leading mark of 75.018 at the halfway stage of the competition.

But it just kept getting better and better, Russia’s Inessa Merkulov and Mister X producing another real crowd-pleaser when first to go after the break as the handsome gelding rolled out his expressive trot extensions and great piaffe/passage for a mark of 76.911 to take the lead.

And if ever there was a stage that suited Isabell Werth and El Santo this was it. The German rider always throws her heart and soul into every test, and even though her 14-year-old gelding decided, like several others, that the spotlight on the beautiful new World Cup trophy that took pride of place by the ringside was extremely suspect, the lady who has stashed 14 Olympic medals into her trophy cabinet just rode him through a scary moment and drew a riotous reaction to her courageous extended canter and hip-swinging passage for a new leading mark of 77.875.

The Netherlands‘ Hans Peter Minderhoud raised the bar higher again with a quality ride on  the elegant Flirt that put 79.036 on the board, only to be immediately overtaken by America’s Laura Graves and Verdades. This bay gelding was much happier in the arena today, and his every move was greeted by applause as he posted 79.125. 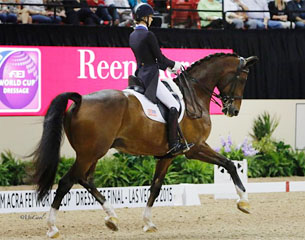 But then along came Dujardin and Valegro, who just blew the rest away as they punched out passage and piaffe of the finest calibre, pirouettes that drew gasps of disbelief from the crowd and a final march down the centerline that was greeted with rapturous applause as their massive score went up on the board.

Edward Gal had to follow that, and despite the pressure produced great work from Undercover who, earlier in the week, was very sensitive to the atmosphere. In the Thomas & Mack arena there is nowhere to run and nowhere to hide, but the black gelding held his nerve to rocket his rider up to second spot, and they wouldn’t be demoted.

America’s Steffen Peters had the audience in the palm of his hand as, second-last to go, he scored 80.286 with Legolas, but sadly he was eliminated after a small amount of blood was found on the horse’s side at the post-competition vet-check. With Peters’ score set aside, that allowed Graves to move up into fourth spot when the final pair, Germany’s Jessica von Bredow-Werndl and Unee BB, were awarded 80.484 and third place despite some early mistakes, the 14-year-old gelding, Unee BB, recovering his equilibrium to deliver some fabulous passage/piaffe and extended trot.

But once again it was all about Dujardin and Valegro whose performance today was very close to perfection. The sport of Dressage has entered a whole new era thanks to the incredibly high standard they have set. Edward Gal said this evening, “when I started out, scoring over 60% was something, then it was 70% and then 80% - but now it seems 90 is the new 80! To come out on the top now you need near-perfection, and with the horses we have we can compete very close to perfection.” Dujardin said this evening that she wondered if the crowd’s enthusiasm would be difficult for Valegro today, but instead, “he just went, yahoo! I must be doing something they like!” She down-played her role in yet another vintage performance. “Valegro just loves his job, I don’t have to force him to do anything, I just sit there and steer and off I go, there’s no sweating, no pushing, no pulling, he knows his job and it’s just fantastic!”

Asked about the wall of noise in the arena she said “that’s what it’s all about! I don’t go into the ring to do less than a 10, and Valegro lets me do that. If he gets worried I know I can reassure him, he trusts me, but he’s always been a brave horse.”

And she was made an incredible offer by Reem Acra, who has supported the FEI World Cup™ Dressage series for the last five years. When Dujardin thanked her for her sponsorship of the Western European League and Final this evening, Reem Acra replied - “I’m very happy to do it. And you know Charlotte that your wedding dress is coming from me!”

Defending champions, Great Britain's Charlotte Dujardin and Valegro, made it a back-to-back double of wins when coming out in the Freestyle competition at the FEI World Cup Dressage 2015 Final at the Thomas & Mack arena in Las Vegas, USA today. 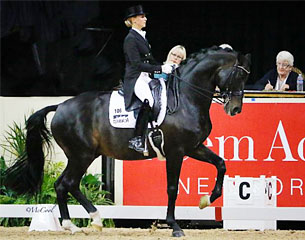 The Netherlands' Edward Gal and Undercover filled second place with a mark of 84.696.

This was the 30th anniversary of the World Cup Dressage series. The inaugural Final took place in 's-Hertogenbosch, The Netherlands in 1986 where Denmark's Anne-Grethe Jensen came out on top.

Winning rider, Great Britain's Charlotte Dujardin, was presented with a brand new silver trophy designed by New York fashion designer Reem Acra. Complete with a leather belt and silver equestrian buckle it marries Reem Acra's two passions – horses and fashion. The new trophy has been mounted on the original base that has been used for the FEI World Cup™ Dressage Final since it was first presented at the Final in 1986 at ‘s-Hertogenbosch (NED).

Charlotte Dujardin: “I don’t think about the pressure, because that’s distracting and things can start to go wrong so I just go in there to do the very best I can do!”

Robert Dover, US Dressage Chef d’Equipe/Technical Advisor : “Sadly Legolas did have a tiny bit of red on one side following his test, the rules are clear and we understand the decision that was made. Steffen is the ultimate sportsman and true ambassador for the sport. When you watch riders, like Steffen, who are so loving and sympathetic to their horses, have something completely unexpected happen, all you can feel is immense empathy and sadness for them.”

Edward Gal: “my horse was nervous on the first day but when you have control you can cope better. The clapping was ok, although it got a bit wild in the prize-giving! The audience is really with you in the ring, they like it and they show it. It’s fine as long as it doesn’t make you make mistakes!” 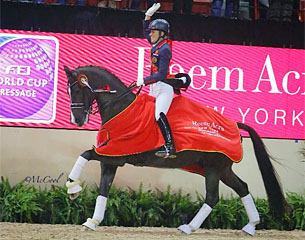 Ground Jury President Lilo Fore:“from where we sit, the judges can only see good horses and riders. No matter how many years I am doing this job the excitement never goes away! Horses nowadays are such amazing athletes. Their movement is more exuberant, they have more suppleness and their impulsion and collection is better than ever before”.

Laura Graves: “I was happy that my horse was more relaxed than Thursday. It was fun and I couldn’t be more pleased”.

Edward Gal:  “the very best should win and Charlotte does such an amazing job and we need horses and riders like them in our sport.”

Jessica von Bredow-Werndl: “I had a roller-coaster of emotion in there today. He (Unee BB) was a bit scared of the light on the trophy and there were some mistakes at the beginning so I thought now I have to go for it, but he did a really good job. I was very pleased at the end”.

Edward Gal, when asked what it was like to be the oldest rider on the podium: “I wouldn’t normally be the oldest one, usually Isabell (Werth) is here! I feel like I’m 25, and after a few operations I could look like it too!”.

Laura Graves: “it’s exciting to have the World Cup in the US, and yes, Las Vegas is surreal. I left my hotel before six this morning and there was a party going on in the bar. And what’s really special is that the crowd bring the party to the stadium!”