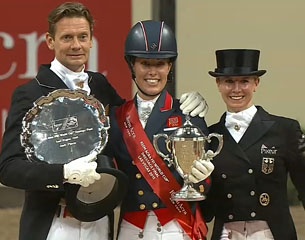 There was no surprise and no challenge for Charlotte Dujardin to reclaim her world cup title as she cruised to victory in the Kur to Music at the 2015 World Cup Finals in Las Vegas on Saturday 18 April 2015.  After earning her first World Cup title in 2014 in Lyon, Dujardin extended the honour this year and shared the World Cup podium with Dutch Edward Gal and German Jessica von Bredow-Werndl.

Charlotte Dujardin put in an immaculate ride to her much beloved music based on the Disney animated movie How to Train Your Dragon. Valegro is a very lightfooted mover despite being a musled athlete. The trot half passes were super dynamic with soft transitions into passage half passes. Dujardin rode smart piaffe pirouettes to change direction. The passage was very lightfooted, but one could wish for slightly more hind leg activity underneath the body. The piaffe passage transitions were flawless and the ride just looked so soft, care free and harmonious. The extended walk had a good V in the clear 4-beat rhythm with two hooves overtrack. Valegro anticipated the canter strike off a bit in the collected walk.  The canter extensions were fantastic, the pirouettes balanced, the one and two tempi changes uphill and straight. The canter half passes covered much ground and showed elasticity in Valegro's entire body.  The left double pirouette was slightly big. In the final piaffe pirouette the horse kept the rhythm beautifully,  but swung the hindlegs out from underneath the body. At the end of their Las Vegas freestyle it became clear that there is no combination in the world at the moment that can equal their level of riding, when they stay fault free. They scored 94.196%

Edward Gal and Undercover (by Ferro x Donnerhall) scored 84.696% to finish second. Their halt was not entirely immobile. The black gelding got very wide behind in the first two piaffes although his rhythm is like clock work. The first trot extension had one hoof overtrack, the second and third did not have sufficient overtrack even though the horse was more open in the throat latch. The trot half passes were very lightfooted and elegant. The collected walk was slightly tense and short, in the extended walk the horse got plenty of rein to stretch the neck and showed very nice overstride. The left pirouette showed good improvement with more lift in the forehand than usual. The right one was quite flat, but small. The two tempi changes were short in the neck, behind the vertical and not straight enough in the body.  The one tempi changes were straighter, but also deep and Edward clearly moved his right hand 15 centimeters away from the withers, overbending the horse's neck to the right with each change to the right. The final passage was very well controlled and engaged, the end halt was immobile but not square. Gal scored 84.696% to finish second. 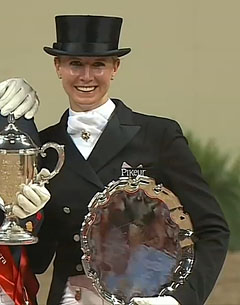 German Jessica von Bredow-Werndl surprised every one by finishing third with a freestyle that earned her 80.357%. She was visibly moved and emotional during the prize giving ceremony. The Aubenhausen based rider was very clever to have her music begin with Martin Luther King's legendary words "I have a Dream" which pleased the American crowds. Later on, her own voice appeared in the freestyle.  Beatice Burchler Keller's black Dutch stallion Unee BB showed bold canter extensions and was quite exuberant in one of them, making an unscripted flying change. The piaffe had decent sit and the horse picked up his feet well. In the trot and passage half passes the nose crept behind the vertical. The trot extensions are expressive but need more overstride. The transitions are well marked by the music. Jessica finished her test with a very conservative piaffe fan followed by another extended trot.

Steffen Peters scored the fourth highest mark of the day, 80.286%, but were removed from the ranking as blood was found due to a cut of the spur during the bit check after the test. According to FEI rules they were eliminated from the class. Peters's ride on Legolas was not one of the strongest in their career. The ride did not look so confident in the Thomas and Mack indoor arena with his Westfalian gelding being quite sensitive to the music and electric atmosphere. The first passage was tense and the horse lost the rhythm when the crowd started to react. The first piaffe failed because the horse was distracted and Steffen had to signal the crowd to be more quiet. Peters rode his canter work at the beginning of his ride and kept the hand brake on. The two tempi changes were safe. The right and left double canter pirouettes were quite big and too much on the forehand. The Canter half passes were conservative. A mistake in the one tempi changes happened as the horse got croup high in them.  Very nice transition from a canter pirouette into piaffe and then into a relaxed extended walk with two hooves overstep. The piaffe improved towards the end of the test. The trot half passes had much reach but the ones to the left could have better regularity. The bend in the passage half passes was really nicet would be nice to see Legolas a bit more up in the bridle with the poll as highest point.  Steffen had a fun surprise in store with his music adapted for Las Vegas including Vanilla Ice lyrics in the piaffe and passage work at the beginning and end of the ride. They scored a generous 80.286% to finish third. The discrepancies between the judging were staggering ! On a technical level Peters had 71.250% as low score (Swedish judge Fransen-Iacobaeus) and 84.00% as high score (U.S. judge Lilo Fore). Peters bested Laura Graves again in the freestyle after losing his number one U.S. spot to the new comer at the World Equestrian Games in August 2014. 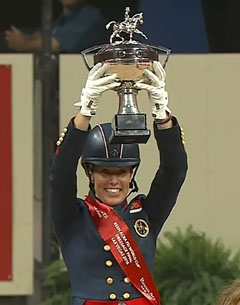 America's dressage sweethearts, Laura Graves and her Dutch bred Verdades (by Florett As), therefore moved into fourth position, but they could easily have bested Von Bredow-Werndl had they probably ridden at the end of the class and got that advantage with the judges. The duo performed to the same music as they did at WEG. They began with a super halt at entry, followed by passage half passes and superior trot half passes. The horse's forté is that he stays nice and soft in the contact and has the poll as highest point pretty much the majority of the time, which is unfortunately an exception nowadays. The piaffe remains to be their weak point. Even though the horse has a very steady rhythm and picks up his feet, he does not properly take the weight on the hind quarters and gets wide in front. He backed up in the second piaffe spooking at the trophy on display. The extended walk was excellent with a brilliant rhythm and massive ground cover. The canter work was solid with powerful extensions followed by nice, small balanced pirouettes and straight, soft tempi changes on a bent line and the centerline.  Graves finished her freestyle with a clean turn in piaffe and very elevated final passage on the centerline. They scored 79.125%.

From his large collection of horses, Hans Peter Minderhoud opted for the Swiss bred Flirt (by Florestan x Gauguin de Lully) as his World Cup mount and finished fifth. Riding to Spanish themed music based on the movie The Mask of Zorro, Minderhoud produced strong trot work with good extensions. The passage was powerful, the piaffe strategically ridden on the track as the chestnut gelding gets wide in front and needs the support of the side of the arena to improve balance. The trot half passes were lovely with good shoulder freedom but the horse's nose should have been more out. This also showed in the lack of stretch forward of the nose in the walk extension, but the overtrack was outstanding. In the canter work the tempi changes were uphill but the two's lacked straightness in the body. The elasticity and jump in the left pirouette was better than in the right one. In the transition from canter to trot the horse dropped into walk.  The sympathetic Flirt was on excellent form in Las Vegas and finished off the ride with bouncy passage work. They got 79.036% from the seven judges. 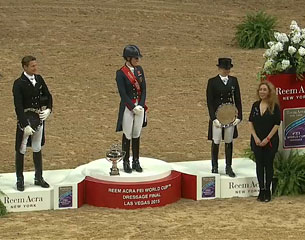 Isabell Werth rode El Santo in Las Vegas and landed sixth place. Her lovely David Bowie freestyle had the crowds clapping from the start and it certainly fit the Las Vegas stage. El Santo backed away from the World Cup trophy which stood in the spotlight in the corner of the arena and she did have to work hard on the bay gelding, which made the performance look laboured instead of light and easy. The changes were certainly big and ground covering but the pirouettes were slightly unbalanced. The passage work was very engaged and regular. In the piaffe he kept the rhythm but crept slightly forward. Werth worked the crowd and she knows how to please the audience. Her freestyle riding is always a pleasure to watch.

Russian Inessa Merkulova was the seventh place-getter with a score of 76.911%. Her 11-year old Trakehner Mister X (by Egeus) has unlimited potential and the horse keeps improving show after show. Spanish Morgan Barbançon were eigth in the ranking. She had switched Painted Black's Tango music to a new composition which is more demure and atmospheric. Her 18-year old Dutch warmblood stallion Painted Black (by Gribaldi) looked fresh and willing with a very good level of energy throughout the test. Her horse appeared fitter than at the World Equestrian Games. Morgan risked much in the trot half passes, which became slightly uneven, but the piaffe-passage work was very regular and off the ground. The half halts were slightly too visible, but Morgan produced animated Grand Prix work. Mistakes in the one and two tempi changes and a big left double pirouette kept the score from climbing higher than 76.161%.