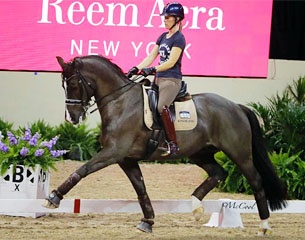 The world's best horses and riders set to compete at the 2015 World Cup Dressage Final took advantage of the schooling session held in the main arena on Wednesday afternoon 15 April 2014, which gave them the opportunity to acclimate their horses to the atmosphere and practice in the dressage arena.

The World Cup Dressage Final is being held at the Thomas & Mack Center in Las Vegas, April 15-19. The World Cup Final has returned to the United States for the first time since 2009.

Each schooling session had a fixed time of 30 minutes, and riders were scheduled in pairs. Although the official classes don't start until Thursday, there were thousands of people in the stands that came to watch the schooling sessions and gave loud applause to each rider that entered the main arena. 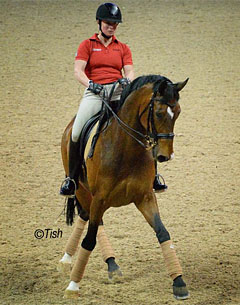 At one point there were two World Cup Dressage champions schooling together. Defending champion Charlotte Dujardin and Valegro practiced alongside two-time World Cup champion Isabell Werth of Germany. Werth won the Finals in 2007 and 1992. However Dujardin is in the strong seat to reclaim the coveted World Cup title which she won for the first time last year in Lyon, France.

The schooling session concluded with U.S. riders Laura Graves on Verdades, followed by Steffen Peters, who won the World Cup Final the last time it was held in Las Vegas in 2009. This time Peters is riding Legolas, the horse he competed at the 2014 World Equestrian Games in Caen, France.

The Netherland's Edward Gal, who won the 2010 World Cup Final on the famed black stallion Totilas, is vying for the 2015 title aboard Undercover, his 2012 Olympic Team bronze medal winning partner. 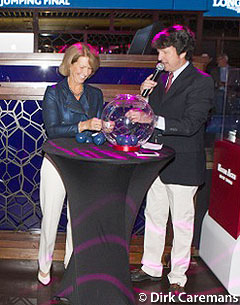 Russia’s Inessa Merkulova will lead the way in Dressage when the much-anticipated 2015 World Cup Finals begin at the Thomas & Mack arena in Las Vegas, USA on Thursday 16 April 2015.

There was a big attendance for tonight’s draw which took place at the Hakkasan nightclub in the MGM hotel. It was America’s Steffen Peters and Denmark’s Agnete Kirk-Thinggaard who selected the names and numbers that decided the order-of-go for the World Cup Dressage Grand Prix which will begin at 12 noon local time.