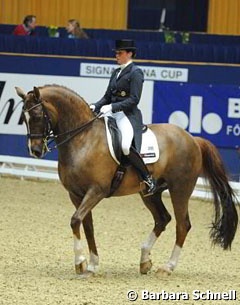 German Grand Prix rider Katharina Birkenholz has lost her 16-year old Grand Prix horse Don Androsso on 8 March 2015. The horse had to be euthanized after being diagnosed with a tumour on his spinal cord.

The Baden Wurttemberger bred gelding was at Dr. Mettenleitner's equine clinic Sudenhof in Hagen to get used to an aquatrainer.  Birkenholz had bought one for her yard and wanted professionals to train her horse in it first. Little did she know that Don Androsso would never return home.

"It's the loss of my life," a devastated Birkenholz told Eurodressage. "It happend so fast. It was pure co-incidence that he was in clinic at this time. Within four hours he lost total control over his body. There was nothing we could do. My phone rang Sunday morning and we immediately drove the 700 km to him, but we didn't had a choice. I stayed with him till he closed his eyes."

Don Androsso was bred by Brigitte Kaiser and was by Donnerschlag x Akzent II x Rokoko. He was the second best competing Baden Wurttemberger in 2014 after Nadine Capellmann's Girasol.

The chestnut gelding was started by Claudia Kaiser and first competed by her in the young horse classes. Birkenholz discovered him at Uwe Schwanz' yard when the horse was seven.

Her coach Ludwig Zierer trained Don Androsso to Grand Prix level and Katharina took over the ride in 2010 after the horse had done its first GP-shows with Ludwig in 2008.

Birkenholz first rode her horse in the Under 25 division and finished fifth at the Piaff Forderpreis finals in Stuttgart. Then they did CDI Under 25 shows before switching to the senior division. They were a member of the German "Perspective" Squad.

Their career highlights includes an 8th place in the 2013 Meggle Trophy Finals at the CDI Dortmund and a second place in the Kur at the 2014 CDI Eibrechsdorf and at the 2013 CDI Hamburg. The combination is remembered for its freestyle with a high level of technical difficulty.

"He was the horse of my life," said Birkenholz. "He taught me everything. He never let me down, he was never ill and he always gave his best! I can't bring in words what the loss of my best buddy means to me. He is the one, who really would have deserved to go into retirement with his friends out in the field."