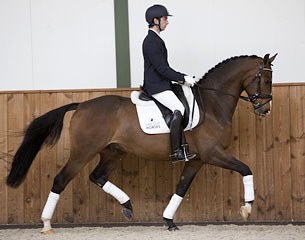 The first Van Olst Sales of 3-year old talented home bred or reared young dressage stars turned out to be a great success! On Friday 3 April 2015 Gert-Jan and Anne van Olst auctioned a collection of 25 handpicked youngsters that show talent for the future.

The price highlight of the inaugural auction was Halegro van het Trichelhof (by Negro x Akribori) which sold for 73,000 euro to Denmark. The 3-year old Haeden (by Chippendale x Haarlem) will remain in The Netherlands and switched owners for 70,000 euro.

"The auction was a success. There was a great atmosphere and there a very good and large audience of interested buyers," Gert-Jan van Olst told Eurodressage. "Already in the preparation we noticed that the concept was good; that there was much interest, for all horses. Quality sells well."

The total turnover was approximately 600,000 euro for the 25 horses sold. Because of the major success, Van Olst has decided to organize a second edition of the Van Olst Sales in 2016 during Easter weekend.