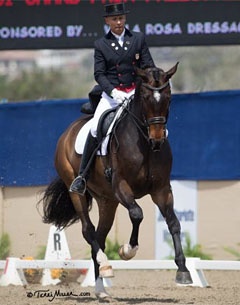 Steffen Peters successfully punched his ticket to return to the site of his 2009 World Cup glory by winning the CDI-W Grand Prix Freestyle with Legolas in an exciting conclusion to the 2015 CDI-W San Juan Capistrano, held 19 - 22 March 2015 in San Juan Capistrano, Cal.

Peters' new personal-best score of 80.925% aboard Four Winds Farm's Westfalian gelding (by Laomedon x Florestan II) was good enough to keep the pair atop the North American League rankings for next month's 2015 World Cup Dressage Final in Las Vegas, where they are expected to join 2014 World Equestrian Games team mates Laura Graves and Verdades to face some of the world's best dressage horses and riders in pursuit of the World Cup title.

But earning the winning score over fellow Olympian Guenter Seidel (who earned 77.100% with James and Charlotte Mashburn's KWPN gelding Zero Gravity [by Royal Hit x Contango]) wasn't easy as Legolas was overly enthusiastic about the loud music, resulting in a ride that ground jury members described as "carefully and expertly ridden".

"It was like somebody put a firecracker under his saddle and it kept going off," said Peters of his mount. "That's Legolas. With the music today there was a lot of fire, and usually when that happens the test is over. But he settled down, and interestingly the walk tour was one of the best ever. I appreciate so much that he never says 'no;' he may get super energetic, but there's not a mean bone in his body where he says 'forget it, I'm out of here'. He still tries, and it may take patience but I appreciate what he did today." 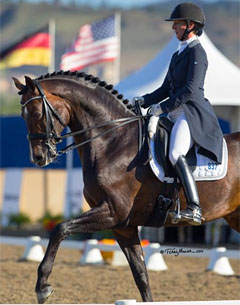 After a fifth-place finish in Friday's hard-fought Prix St. Georges class, Sabine Schut-Kery and Alice Womble-Heightman's bay Hanoverian stallion Sanceo (by San Remo x Ramiro's Son II) returned to winning form in the Intermediaire I Freestyle on a score of 73.950%. Despite this being the first time Schut-Kery had performed the new freestyle (which was created with the help of her husband Kristian Kery), her elegant ride aboard Sanceo was good enough to earn the narrow victory over Elizabeth Ball riding Cadence LLC's Dutch Warmblood gelding Avanti (by Tuchinski x Naturel) with 73.050%.

"I really wanted to focus on training and ran a little bit out of time - so I would have liked to have had a few more practice rides, but it ended up going well," said Schut-Kery of her freestyle. "Sanceo has been very consistent and has given me a great season already, so I'm really, really happy. We now have all of our qualifying scores for the Pan American Games and we're sitting in a good place, so we'll go home and see what happens now. Most of all, I realize that to compete at this level with an eye on something like the Pan Ams you have to have the right mount, and I'm so grateful to Sanceo's owners to have the ride on this very special horse."

Rounding out the CDI freestyles in the Olympic Arena was Mia Slaughter, who earned her first international win with Jenifer Luce-Zakhary's Hanoverian gelding Harrington L (by His Highness) in the Junior Freestyle on a score of 61.167%.

Meanwhile, Catherine Chamberlain continued to rack up wins in the CDI Under 25 division, adding today to her growing resume with a score of 65.543% in the CDI Grand Prix 16-25 Test aboard her KWPN gelding Verdicci (by Krack C x Jackson).