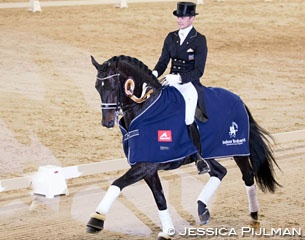 Edward Gal has presented his new rising FEI horse, Zonik, at competition for the first time in front of an international audience at the 2015 CDI-W 's Hertogenbosch, The Netherlands. The popular Indoor Brabant event kicked off on Thursday with a small national Prix St Georges class for licensed stallions. Gal deemed it the perfect opportunity for a test ride on Zonik.

The 7-year old Danish warmblood stallion Zonik (by Zack x Romanov) first came into the spotlight under Andreas Helgstrand. The duo won the 2012 Danish Young Horse Championships three years ago in the 4-year old division and the dark bay then sold to Austrian Gaston Glock. Under Hans Peter Minderhoud he competed at the 2013 World Young Horse Championships in Verden, Germany, where he finished 8th in the consolation finals, but the stallion was always meant to be Edward's ride.

Since Verden Zonik has stayed home and only did one small local warm up show in Uden before his bigger appearance in 's Hertogenbosch yesterday. The duo won the PSG exhibition class with 78.289% and was a league of their own according to the judges' panel consisting of Peter Holler, Jacques van Daele and Francis Verbeek. 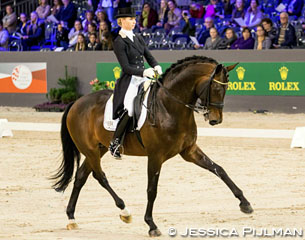 In an interview with Dutch equestrian magazine De Hoefslag, Gal commented the following after his ride: "‘He felt super. It really looked like the real thing. He has much quality, is beautiful and has a great temperament. Look how relaxed he was after the test. This can be real thing."