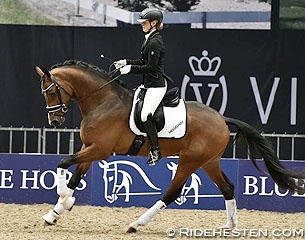 Sixteen 3-year old dressage bred colts were approved at 2015 Danish Warmblood Stallion Licensing held in Herning, Denmark, on 5 - 8 March 2015. Six of them were awarded a premium but for the first time no licensing champion was named.

Poul Graugaard of the Danish Warmblood Stallion Licensing Committee praised the collection as the best in many years, "probably the best collection ever."

A couple of months ago the Danish Warmblood Society decided no longer name a champion stallion at the licensing for the same reason as the Hanoverian society dropped the concept of licensing champion a few years ago. They don't want breeders to focus on just one stallion, but rather on the whole collection of approved colts.

A total of 25 young dressage and show jumping stallions approved in Herning will now move forward to the mandatory 10-day observation test following immediately after the licensing, prior to receiving their full license for the 2015 breeding season.

The premium stallion UNO Don Olympic (by Don Olymbrio x Del Piero) became the price highlight at the auction following the licensing. He sold for 94,000 euro to Danish U25 rider Anna Zibrandtsen. Jens Thorsen of Gestüt Pallerhaff in Luxemburg acquired 1/3 share in the ownership of UNO Spotlight (by San Amour x Donnerhall). He paid  67,000 euro for that share and now co-owns the horse with Stutteri EVO and Stutteri UNO. The average price for a stallion at auction was 32,462 euro.
The premium dressage stallions are