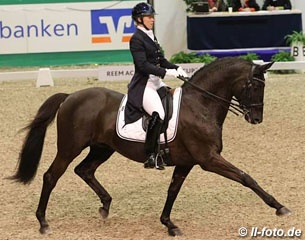 “The ride in Amsterdam was just amazing, and I am really pleased that the test scores matched my feeling,” said Terhi.

Having improved a lot over the last year, Terhi told Eurodressage she hasn’t actually changed anything specific in the way she works Axis (by Sixtus x Angard), but she puts their continued success down to two things.

"Firstly, the ongoing training I receive from Richard White, Kyra Kyrklund's husband, and secondly that Axis and I are a long established team. The length of our relationship has allowed me to switch focus from teaching new movements to polishing existing routines, as Axis already knows everything for the Grand Prix," said Stegars.

This has enabled Terhi and Axis to build on their Amsterdam experience, going on to produce their highest Freestyle score to date,  a 77.6% at the 2015 CDI-W Neumünster in Germany. “It is never boring with Axis.  He is a very active, social horse who is always watching what is going on," she said. "He is King of the stables, is hugely self-confident, and thinks he owns the whole world. He gets very excited by small ponies and carriages, which can make big international competitions rather lively.   His particular favorites are light chestnut or grey mares, and he is completely in love with Bella Rose, and secretly has a crush on Half Moon Delphi.”

Terhi adds that Axis is a great competition horse as he is very brave and rarely gets spooked by anything except his own shadow.

“Riding him is a real treat, and as for future plans I have my sights set on Las Vegas followed by the European championships," she concluded.