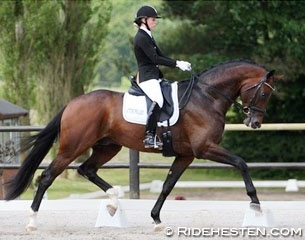 Atterupgaards Seebach and Handsome O will not be participating in the 2015 Danish Warmblood Stallion Licensing in Herning, Denmark, on 4 - 8 March 2015. Both stallions have been withdrawn due to an injury.

Atterupgaards Seebach, the 2014 Danish licensing champion of the 4-year olds, has not yet fully recovered from an injury he sustained during breeding in the summer of 2014. This means Seebach (by Sandro Hit x Caprimond) won't be presented in Herning and he will not be available for breeding in 2015.

The Norwegian owned Handsome O (by Johnson x Rousseau), who was the champion of the 2015 KWPN Licensing in February, will be unable to go for Danish approval in Herning next week. The bright bay sustained a minor injury which requires a few weeks of rest.