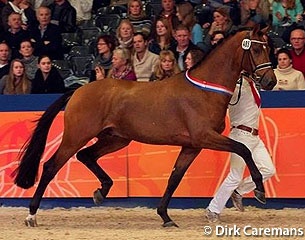 The bay Handsome O (by Johnson x Rousseau) has been named champion of the 2015 KWPN Stallion Licensing in 's Hertogenbosch, The Netherlands, on Saturday 7 February 2015.

Bred by P. Oosterbosch and owned by Jan Brouwer, the stallion also sold for the top knock down price at the KWPN Select Sale. Norwegian Kirsten Andresen acquired him for 300,000 euro.

"The champion stands out with his strength, potential to collect and his uphill way of moving. Also the canter is his strong point," said Wim Ernes, chair of the KWPN Licensing Committee.

Thirty-one stallions in total were approved to do the final phase of the KWPN Stallion Licensing, the Stallion Performance Testing, before they obtain full licensed status. Eight of those were invited to the premium ring.

The reserve champion was Hornrose (by Apache x Ferro), bred and owned by Frans and Martien Burgers. This lightfooted black stallion has a striking appearance and was praised for his hindleg usage.

Handsome (by Wynton x Cabochon) finished third in the premium ring. This elegant colt with beautiful front is bred by K. van Zaanen.

The second most expensive stallion at the auction was the approved Hot Game (by Easy Game), which was acquired for Robin van Lierop by RS2 Dressage Center for 140,000 euro. Andreas Helgstrand from Denmark bought Hot Shot VDT and Happiness Returns C for 100,000 euro and 90,000 euro. Russian Nataliya Bronnikova bought Hummer for 85,000 euro.

The average price for a stallion at this auction was about 57,000 euro.