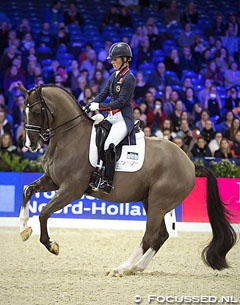 Ruling World, Olympic and European champion Charlotte Dujardin trailered her top horse Valegro to the World Cup qualifier in Amsterdam to face the creme de la creme of the Dutch scene and no German WEG team opposition at the frontline. Dujardin won the Grand Prix on Friday noon 30 January 2015 with a big booboo at the end, yet still scoring a tidy 86.140% for victory eight percent ahead of the pack.

As the Grand Prix was drawn according to the FEI World Ranking list, the best riders rode last and took full advantage of the natural bias of judges who up their scores at the end of a test because of comparison and name bias. It's not a level field of play but only few bobo'sseem to care about having fair play in the sport. The judging panel in Amsterdam including the experienced international judges Isabelle Judet (FRA), Adriaan Hamoen (NED), Stephen Clarke (GBR), Peter Engel (GER) and Eddy de Wolff van Westerrode (NED).

Dujardin and Valegro are off to a strong start at their first show of 2015 winning the Amsterdam Grand Prix. The pair was scoring closely to their world record but a hiccup at the end of the test tampered with the score. The 13-year old Dutch warmblood appeared fit, fresh and fruity. The trot work was springy and dynamic with big extensions, even though there could have been more overtrack in the second one. Dujardin was quite unsteady with her hands in the trot half passes and the rein back was normal. The first piaffe was rhythmical, the passage expressive. In the extended walk Valegro had two hooves overtrack but the nose couldn't have been more out. The collected walk was slightly tense. In the second piaffe Valegro skipped his right hind leg to the right out from under the body with each step instead of keeping it balanced and tucked beneath his body. The canter work was high class with big flying changes and a well ridden zig zag een though the horse slightly dropped behind the vertical. The extended canter was not ridden on the marker and got collected too early. The pirouettes were beautiful and the last trot extension super.  In the final piaffe at X Valegro lost the impulsion and Dujardin thought he had to poo as she turned her head around. In the ensuing passage the hindlegs trailed and the final halt was not square. 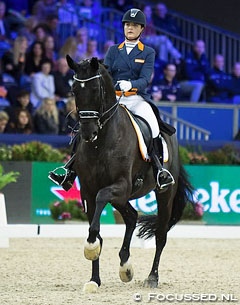 This brings us to another critical point in the development of the sport. A group of fractionists in powerful places believes it's essential to shorten the Grand Prix test so it remains "popular" with the leyman masses that don't watch dressage anyway. In Amsterdam hardly ANY of the top scoring riders were able to halt squarely and in balance or execute a proper rein back! But those movements are not important and "disrupt the flow of the test," éh !?

Anyway, back to business. Dujardin scored 86.140% and placed first with all five judges. Her low score was 83.200 (Judet) and her high score came from British judge Clarke (88.600).  The judges were less on point with the second placed pair, Danielle Heijkoop on the 16-year old Dutch warmblood Siro (by Gribaldi x Hemmingway). The Dutch duo scored a very generous 78.320% to become the runner-up. Dutch judge Eddy de Wolff even rewarded her an 80.800% but German judge Peter Engel stayed more conservative with his 73.600%

Heijkoop did show a lot of strong points in her test with the fantastic piaffe being the forté. The black Siro is incredibly rhythmical, stays on the spot and lowers the haunches. They are absolutely beautiful to watch. The passage work, however, was less consistent. In the first piaffe the horse got quite uneven behind with more more right hind leg activity and tilted to the left in the first part. The second passage was regular, buton the final centerline from X to G he got overzealous with exaggerated hind leg activity, become croup high and overpowering in the movement. The trot extensions had one hoof overtrack, the last one was more scopy but the horse looked sour. The rein back was poor. The extended walk was good but could have had more stretch over the top line, the collected was tense. The tempi changes were very solid, the zig zag was well ridden, but the pirouettes needed more balance. The final piaffe at X was the highlight of the test. 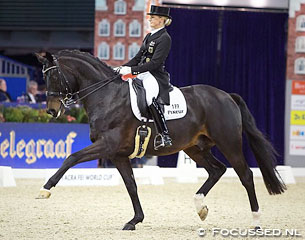 German Jessica von Bredow-Werndl and judge Beatrice Burchler-Keller's 14-year old Dutch warmblood stallion Unee BB (by Gribaldi x Dageraad) landed third place. This German pair has found its niche on the World Cup circuit as their scores stay a fraction shy of team consideration. Also in Amsterdam, the piaffe work remained small but rhythmical and in the passage the compact black stallion had the hindlegs out behind the body instead of properly stepping under, despite keeping a very regular rhythm. The trot and canter extensions were outstanding but there were two mistakes in the single tempi diagonal (which earned her scores from 5 to 7). They scored 74.880%. 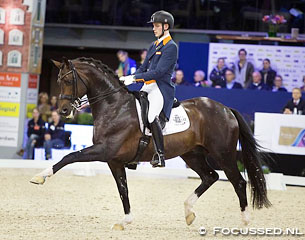 Diederik van Silfhout and the 10-year old Dutch stallion Arlando (by Paddox x Mytens xx) made their show comeback since the 2014 World Equestrian Games and returned with style. The halt at entry was not square and the horse dragged his legs in the rein back. Arlando is a drop dead gorgeous stallion with incredible lightfootedness but he still appears tense in the top line and could have more natural swing over the back. The horse not once achieved overstep in the trot extensions but still received 7+ marks for the gait (same problem with Totilas, Bella Rose, etc!). The half pass right had more elasticity than the one to the left. Arlando has amazing potential in piaffe and passage. In the first one he lost the rhythm but the passage had much airtime. The second and third piaffe were very carefully ridden. The tempi changes were all correct and straight but lack ground cover. The zig zag was accurate. At the end of the test Arlando lost the rhythm in the passage. Van Silfhout keeps a very steady, quiet contact with the bit and although it could be a fraction lighter, it is wonderful to see the horse with the nose out at all times! They finished fourth with 74.860% 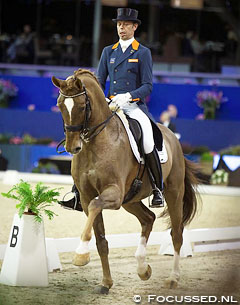 Edward Gal and Undercover were entered to compete in Amsterdam but had to cancel last minute because the horse had a temperature. Gal's partner Hans Peter Minderhoud has been focusing on the 14-year old Swiss bred Florestan x Gauguin de Lully gelding Flirt for the indoor show season as his top horse Johnson has not yet returned to the ring since WEG.  The strapping chestnut lengthens the steps well in the extensions and showed good trot half passes, especially the one to the left. In passage Flirt crosses the front legs in front despite the expressive side silhouette, but in piaffe he remains very unbalanced and gets extremely wide in front. The extended walk was good but Flirt paced at the beginning of the collected walk (scores 6.5 to 8 !!). The tempi changes have much ground cover and are uphill, the pirouettes were good. They were fifth with 74.320%