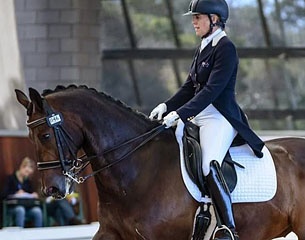 Mary Hanna and her 14-year old Dutch warmblood gelding Umbro (by Jazz x Juventus) have won the Pacific League World Cup Final Grand Prix Freestyle and in doing so earned the right to start at the 2015 World Cup Final to be held in Las Vegas in April. Hanna edged out Australian routiniers Heath Ryan and Regardez Moi for a ticket to Las Vegas.

It would be Hanna’s fifth appearance at a World Cup Final and her second start in as many years after the four-time Olympian represented Australia at the 2014 World Cup Final in Lyon, France, with her Olympic and World Equestrian Games mount Sancette (by Sandro Hit).

On their way to winning Saturday's Freestyle the combination received a score of 71.650% and for Hanna it was a nostalgic night as she used the music arranged for Limbo, Hanna's Sydney 2000 and Athens 2004 Olympic Games.

"It is quite a difficult freestyle. We had a few moments but basically I'm really happy with him," said Hanna "I've only had a short time with him since I've been back (from Europe) but he just keeps getting better and better each time."

Hanna had to fend off stiff competition from Heath Ryan and the 19-year old Regardez Moi (by Rubinstein) who finished marginally behind with a score 71.200%.

Youth Development Squad rider Katharine Farrell and her Hanoverian Luxor (by Londonderry x Argentinus) finished in the top three receiving a score of 70.675%. It is a tremendous achievement for the 19-year old who has only been competing at Grand Prix level since last year.