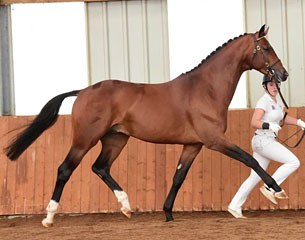 On Saturday 10 January breeders of the top British bred horses from around the country converged in London at the Grange City Hotel, for the annual British Breeders Dinner and Awards Ceremony, organised by the British Horse Foundation.

There has been much to celebrate for British Breeding in 2014 and this glittering occasion affords the breeders of these potential world-class horses the special recognition they deserve.

Guests arrived at the Competition Stallions-sponsored drinks reception before moving on to a sumptuous four-course dinner, followed by invited guest speaker Lynne Crowden, who gave a very entertaining and insightful speech on the Peaks, Perils and Pitfalls of being a British breeder. The evening then moved on to the much-anticipated Awards ceremony, compéred by event commentator Chris Otty, standing in for Mike Tucker.

Young, professional and amateur breeders were well represented throughout the Awards Ceremony in the British Breeding/BEF Futurity Certificates of Merit. Winners included for the second year running Kirsty Millard, this year for her sports pony foal KMD Dornlight along with Amy Cox who bred Pretty Picture, they were the joint winning sports pony foals.

In the Futurity age awards, Rosie Moreton-Deakin picked up the foal award for breeding Fiderstar, a potential dressage prospect. Zoe Feeney collected the yearling award for Just Soda No Ice, a show jumping prospect. The two-year old award went to Summertime Blues bred by Lynne Crowden, with the three year old award going to Timolin, who was winning a Futurity award for the third time, bred by Aram Gregory, this colt is destined for a dressage and stud career, having recently been purchased by Catherston Stud.

Young horse awards were then presented to breeders of the best British bred young horses in the three main equestrian disciplines; Dressage, Eventing and Showjumping.