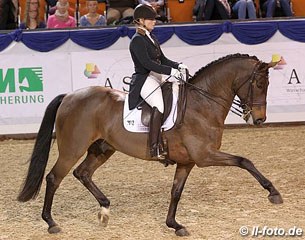 Isabell Werth and Ingrid Klimke ruled the big tour classes at the big 2015 season opening national indoor competition in Munster, Germany. With a packed field of some of Europe's best dressage riders, the 2015 CDN Munster was the place to be for dressage lovers. While Werth confirmed her form with Don Johnson, Ingrid Klimke make her come back on Dresden Mann after a one year absence from the ring.

The Grand Prix Special tour was an easy prey for Isabell Werth on her 13-year old Hanoverian gelding Don Johnson (by Don Frederico x Warkant). The frisky bay gelding was on the job and produced top scores of 78.680% in the Grand Prix and 79.216% in the Special. Anabel Balkenhol and her 15-year old Hanoverian Dablino (by De Niro x Wanderbusch II) were one of two come back duo's of the show. While Dablino returned to the ring after a year and a half break due to injury, in Munster the sensitive chestnut proved his worth once more and scored above the 75% marker. They got 76.080% in the Grand Prix. In the Special they finished second with 74.902 %. 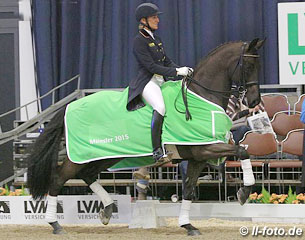 Ingrid Klimke made her come back to the show ring on Clodagh Wallace's 11-year old Westfalian gelding Dresden Mann (by Dresemann x Florestan). The black was sidelined for a year due to an injury, but after some green medicine in the field, he has returned to full fitness and threw himself back in the battle in Munster. The pair won the Short Grand Prix for the Kur with 72.953% and the Kur to Music with 78.31%.

"I'm so proud of Alfi," Klimke commented after her Grand Prix win. "In the entire test he felt loose, fresh and expressive. A victory with so many fans and friends on the sideline makes me really happy."

Check out the photo report from Munster by our German photography correspondents of LL-foto.de.