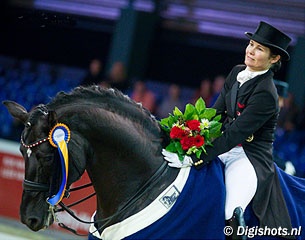 Danish Rikke Svane and her gorgeous Trakehner bred Finckenstein were the winners of the first international Grand Prix class held in Europe in 2015. At the indoor competition in Drachten, The Netherlands, on Friday 9 January 2015, Svane and Finckenstein impressed the five judges on the panel to score a winning 71.020% in the Grand Prix.

The 2015 CDI Drachten boasts a massive field of over 100 competitors for three days of showing. The Grand Prix was judged by Monique Peutz, Hans Christian Matthiesen, Peter Holler, Bo Jena and Maria Colliander.

Svane and her 13-year old Finckenstein (by Latimer x Kennedy) were able to top the leader board in a field of 19 riders. With her score of 71.020 Fie Skarsoe's student edged out German Carola Koppelmann on the talented 13-year old Westfalian gelding Deveraux B (by Dimension x Rivellino xx) who finished second with 70.740%.

German Ellen Schulten-Baumer has made her return to the international arena in November 2014 at the Munich Indoor competition and she's continuing her campaign on the 13-year old Hanoverian Grosso's Gentle (by Grosso Z x Ordos xx) in Drachten. The pair produced consistent marks on the board and finished shy of 70% at 69.800% to rank third.

The top scoring Dutch rider on home turf was Laurens van Lieren on his 14-year old Dutch warmblood gelding Ulysses la Haya (by Gribaldi x Ulft). The pair posted a score of 69.680%. Belgian Fanny Verliefden has made her come back to the CDI ring on the talented Dutch mare Annarico (by Lord Loxley x Havel). The pair competed at small tour level in 2013 and trained for the Grand Prix work last year. In their first international Grand Prix class they scored a very promising 69.260%.