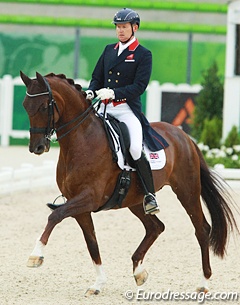 Nadonna began her international Grand Prix career under British Gareth Hughes at the 2011 CDI Hartpury, where they finished fifth in the Grand Prix with 66.723% and second in the Special with 69.208%.  They were first selected on the British team for the 2013 European Championships in Herning, where the mare was not able to cope with the electric championship atmosphere. Despite their disappointing ride, the Brits earned team bronze. The duo had their rematch at the 2014 World Equestrian Games in Caen, France, where they finished 38th with 69.714% in the Grand Prix and earned team silver. Two months prior to the Games, Gareth and Nadonna won the WEG Test event.

"The decision has been made while the sixteen year old chestnut mare is still fit and well and can enjoy a well-earned retirement at home with her owners," Gareth explained. Owner Jane Brewin stated that, "we've been very lucky to see her fulfil her potential but our promise to Donna was always that she could enjoy her retirement. We have so many people to thank, especially Gareth, Steph, and all the team who have kept her happy and healthy. She's enabled us to live our dream and now it’s time for Donna to live hers."

Gareth is very grateful for the time he has had with the mare.

“We’ve had an amazing few seasons, capped off with WEG last year. Donna will be seventeen this year, and Jane and Kevin decided that they’d like to give something back to the mare and give her a nice retirement as a thank you for what she’s given them. When we started together we didn’t expect we’d end up doing a Europeans or a World Championships but I couldn’t be more thankful for what she’s given us, she’s outdone all our expectations, and each step we made forward was very special.”