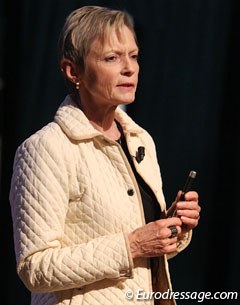 Our guest columnist of the week is renowned Dr. Hilary Clayton, veterinarian, author, researcher, and clinician. She is known internationally for her ongoing contribution to the understanding of equine biomechanics particularly relating to performance and conditioning. Dr. Clayton’s targeted studies in bitting, saddle fit biometrics, kinematics and kinetics, and locomotion have provided valuable insight into the mechanics of equine sports and the interaction between rider and horse.  Her guest column here is a summary of a recently published paper on how judges assess a horse's head position in 1992 versus 2008.

This research study addresses the controversy regarding head and neck positions of dressage horses by conducting a retrospective analysis of the angulation of the horse’s head during high level competitions to determine whether there were any significant changes over a period of 16 years from 1992 to 2008. 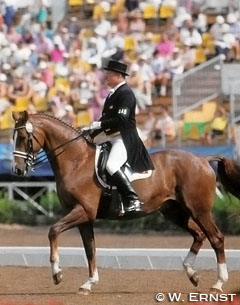 The basic premise of the study was based on the FEI Handbook which, in the description of the object and general principles of the test, states that: “The head should remain in a steady position, as a rule slightly in front of the vertical, with a supple poll as the highest point of the neck, and no resistance should be offered to the Athlete.” Since the position of the head is factored into the judge’s score for every movement and also into the collective marks awarded for general impression at the end of the test, it is reasonable to assume that a persistent faulty position would affect the final score.

The analysis was based on video recordings of the top 15 finalists at the 1992 Olympic Games and at the 2008 World Cup Final. All the horses were warmbloods bred in Europe and were similar in age at the two competitions. At each competition a video camera was set up perpendicular to the short side of the arena. Recordings of collected canter, collected trot, passage and piaffe were made on the short side of the arena. The videos were analyzed frame-by-frame using Dartfish software to measure the angle of the front of the horse’s nose relative to the vertical during a complete stride at each pace. In all horses the analyzed strides were for the same movements, at the same place in the arena and were not within 3 strides of a transition. The head position in each video frame was classified as being behind the vertical or as being at or in front of the vertical. The overall scores awarded by the panel of judges were also compared between the two competitions and in relation to the horse’s head position.

The results showed that the horses held their heads behind the vertical more than 50% of the time at collected canter and collected trot during both the 1992 Olympic Games and the 2008 World Cup Final with only small differences between the two competitions. However, larger differences were found in passage and piaffe. In 2008 horses were behind the vertical 71% of the time in both passage and piaffe compared with 48% for passage and 45% for piaffe in 1992.

Movement: 1992 Olympic Games ------ 2008 World Cup Final
Percentage of stride during which the head angle was behind the vertical. As one might expect, the overall the scores improved from an average of 65.5% in 1982 to an average of 70% in 2008. Perhaps less expected was the fact that higher placed horses in 2008 were significantly more likely to be behind the vertical. This suggests that the criteria used by judges to interpret the FEI rules may have changed in the intervening period. Of course, many factors are considered by the judges and few people would argue that the standard of performance has improved greatly. However, the correlation between a horse spending more time behind the vertical and receiving a higher placing in the competition requires further investigation.

The entire paper on this study, can be found here.