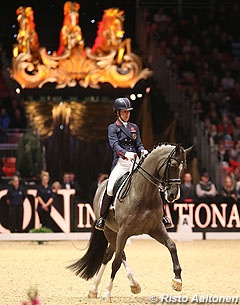 Charlotte Dujardin and Valegro once again delighted a packed house at Olympia, The London International Horse Show, producing a World Record score in the World Cup Dressage Grand Prix on Tuesday 16 December 2014. The mark of 87.46% beat their previous record, set by the World, Olympic and European Champions at the World Cup Final in Lyon earlier in the year.

Charlotte, who has come to the Show directly from The BBC Sports Personality of the Year in Glasgow, complete with a bad cold, was as equally delighted with the new record score especially as it was their first competition since  the 2014 World Equestrian Games in August.

"We don't set out to break a record it just happens - we just want to do our best and any record is a bonus," said Charlotte, who always looks forward to competing at Olympia. "It is a great end to the season and fantastic to be competing in front of the home crowd and Blueberry never fails to rise to the occasion." 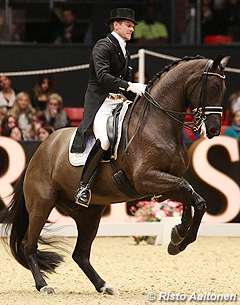 The pair head the draw for tomorrow night's World Cup Freestyle with Charlotte promising to 'let rip' to the routine that is set to the music from 'How to train your dragon.'

Dutch team rider Edward Gal, a regular and popular visitor to Olympia, was second with Undercover with the high mark of 80.12%, albeit still 7% adrift of the winning score. The Dutchman admitted that having to follow Charlotte was not ideal preparation for a test.

"Undercover got very excited by the clapping and I had to hold him back at the beginning of the test but I was very pleased that he found his one-time changes again as he had totally lost them yesterday," said Gal. 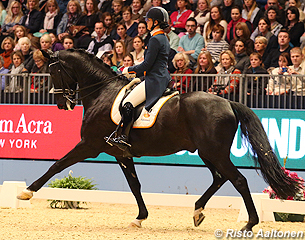