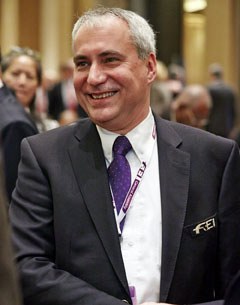 Ingmar De Vos (BEL) was elected as President of the Fédération Equestre Internationale (FEI) by an overwhelming majority in the first round of voting, earning 98 votes out of a possible 131. De Vos, 51, Secretary General of the FEI since May 2011, was elected to take charge of the world governing body of equestrian sport during this morning’s session of the FEI General Assembly in Baku (AZE) on 14 December 2014.

The result was announced by HRH Princess Haya, the outgoing President, with the simple words, “I am pleased to announce we have a new FEI President, Ingmar De Vos”. Her words were met with prolonged applause from close to 350 delegates representing 91 National Federations, stakeholders, sponsors and international media.

“I’m really very honoured and overwhelmed by this enormous support,” a clearly emotional De Vos said, “and I would like to thank you from the bottom of my heart for your confidence. Baku will be in my memory forever.

“Elections are always difficult, as it splits a little bit the family, but I guarantee that I will be the president of all of you, I will serve all the members of our community and I will work very hard to keep this unity.”

He went on to thank his great friend and mentor Jacky Buchmann, who has recently been re-elected as President of the Belgian Equestrian Federation. And finally, with great emotion, he thanked outgoing President Princess Haya.

“Words cannot explain what she has done for our organisation. She has shown leadership, she has guided us through difficult waters, she has innovated us, she has modernised us. She has left us with a great legacy and I believe, together with many of you, that it is our responsibility to preserve the legacy and go on with the roadmap she has shown us. Words are not enough to thank her. Over the years we have become good friends, and I am thankful and grateful for your support. Thank you from the bottom of my heart.”

Shortly after his election, De Vos received a letter of congratulations from IOC President Thomas Bach. “Please accept my congratulations on your election as President of the International Equestrian Federation. The IOC enjoys a long-standing relationship with FEI, its elected members and administration. We are sure that FEI will continue its growth under your leadership. Your previous experience in different positions of the Equestrian sports will be invaluable for you in this new office. On behalf of the IOC and the entire Olympic Movement, I wish you every success in the new role you are undertaking.”

De Vos takes over the reins as FEI President at the conclusion of today’s FEI General Assembly for a four-year term, and is eligible for re-election for up to three consecutive terms. He has stated that he will resign as Secretary General as soon as he takes over the Presidency this afternoon and will appoint an interim Secretary General to take over the role until a permanent replacement is found.

The other candidates standing for election were Pierre Durand (FRA), Pierre Genecand (SUI), John McEwen (GBR), and Ulf Helgstrand (DEN). Helgstrand withdrew his candidacy before the vote, and a sixth candidate, Javier Revuelta del Peral (ESP) withdrew from the election process in November.

FEI General Assembly 2014 – how the votes were cast:

Ingmar De Vos (51) holds degrees in political science, business administration and international and European law, and started his career as an advisor to the Belgian Senate. He joined the Belgian Equestrian Federation as managing director in 1990, and held the additional role of Secretary General from 1997 to 2011.

During his time at the Belgian National Federation, De Vos was chef de mission for the Belgian Equestrian Team at all FEI World Equestrian Games™ from 1990 to 2010 and at several Olympic Games. He was also Secretary General of the European Equestrian Federation from 2010, the year the organisation was formed, until 2011, when he joined the FEI.