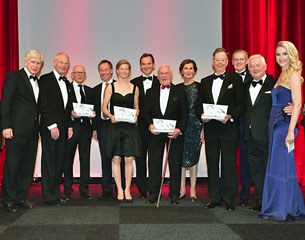 Only few people can call a P.S.I. Award their own. Since 2004, outstanding performances in the categories Sport, Lifetime Achievement, Media and Supporter at and around equestrian sports are honoured each year at the beginning of December at the Performance Sales International. Four noble horse sculptures, made of Swarovski-crystals, found new owners on the occasion of the Gala Evening Show of the 35th P.S.I. Auction on December 6 and 7 in Ankum in Lower Saxony.

The show evening was charmingly presented by Germany’s most popular anchorwoman Judith Rakers, together with the two organizers of the P.S.I., Ullrich Kasselmann and Paul Schockemöhle. Sandra Auffahrt, individual and team World Champion, was given the P.S.I. Award in the category “Sport”. The 27-year-old rider runs a breeding and training stable in Ganderkesee near Bremen, and she relies at international championships on her Selle Francais-gelding Opgun Louvo, fondly called “Wolle”. Eventing gold medallist Hinrich Romeike highlighted Sandra “Icecold” Auffahrt’s success at the 2012 Olympics in London when she won the individual and team gold medal in his laudation, he looked back on the double win at the World Equestrian Games in Normandy and on two victories achieved at the Nations Cup in Aachen in 2014.

The P.S.I. Award in the category „Supporter“ went to a meticulously working visionary, as publisher Gudrun Braun described him in her laudation. “André Trouillé is a self-made man – an idealist, imbued with enthusiasm, who supports everything he deems eligible for support”. As passionate rider, Trouillé knew about the problems in equestrian sports, helping and assisting wherever he could. André Trouillé was nominated for the P.S.I. Award because he did not only talk, but acted, Gudrun Bauer emphasized.

One of the most quoted daily newspapers in Germany was honoured with the P.S.I. Award in the category “Media” in front of the approx. 650 guests. The newspaper “Neue Osnabrücker Zeitung” accommodates the enthusiasm for horses in the Osnabrück area and provides the public platform for many equestrian events. The newspaper also participates at the online horse market “ehorses”, thus contributing to the successful development of the regional horse business in the Osnabrück area. Hermann Elstermann and Prof. Dr. Dres. h.c. Werner Ebke accepted the Media Award.

The P.S.I. Award in the category “Lifetime Achievement” is a special prize given at the Gala Evening. Klaus Philipp is the best horse painter of the world, that’s how the German news magazine “Der Spiegel” once described him. “First and foremost, he was a horseman, then a painter, and he only became a horse painter later,” Dr. Andreas Jacobs explained in his laudation. “His horse drawings with pencil or charcoal are famous worldwide. I also own one of his works that reminds me of one of the most gorgeous horses and of wonderful moments every day,” the owner of the well-known thoroughbred stud farm Fährhof praised the modest artist.

Later that evening, Jacobs displayed his passion for the noble four-legged animals one more time – this time for a good cause. The chairman of the Jacobs Holding purchased a foal that was spontaneously donated by Paul Schockemöhle. The auction for the benefit of the initiative “Riding against Hunger”, launched by publisher Gudrun Bauer and horse expert Ulli Kasselmann, concluded the official part of the evening. It stands for social responsibility and has been supporting the work of the German Agro Action since 2012. Patroness of the initiative is Federal Minister Dr. Ursula von der Leyen. Together with many well-known riders and horse enthusiasts, they involve themselves in assisting other people in combating hunger.

Apposite to Christmas, there were quite extraordinary things to purchase for the benefit of “Riding against Hunger”. Two V.I.P. passports for the DKB-Riders Tour were sold at Euro 10,000, an originally signed jersey of the German national soccer team changed owner at Euro 25,000, and one of the limited Swarovski-sculptures “The Black Stallion” from the exclusive designer edition of Heinz Tabertshofer raised Euro 28,000. Together with the auction sales price of the foal, the total revenue amounted to Euro 108,000. “I am overwhelmed and would not have dared to dream of such a fantastic result,” Gudrun Bauer happily said.

Today is final Sunday of the 35th P.S.I. Auction. As of 3.00 pm, approx. 50 dressage and show jumping horses will find new owners all over the world. Maybe some of the P.S.I.-four-legged auction candidates will also become generous Christmas gifts.

This is the schedule of the 35th Performance Sales International:

The organizers of the P.S.I. and the whole team will be there for assistance and advice. For more information about the collection, the auction, POCs and service, please click on www.psi-auktion.de.