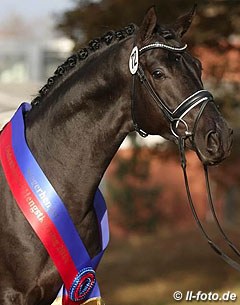 The drop dead gorgeous black Morricone (by Millennium x Rubin Royal x De Niro x Rubinstein) became the champion of the 2014 Oldenburg Stallion Licensing in Vechta, Germany, on Saturday 22 November 2014. Seven stallions in total received the premium label and twenty-four colts out of a collection of 38 were licensed.

The dressage collection of the 2014 Oldenburg Stallion Licensing was of high quality. Maybe there were only few stallions with the "sire" aspect to them, but there were a very large group of wonderful young dressage sport horses that could certainly make it in the show ring.

The favourite for the champion's title from day one was the eye catching black Morricone, bred by Heinrich Vahle and owned by Gestut Sprehe. The black presented him well on the lunge line and moved spectacularly in freedom. The hind leg reached under in canter and in trot he was very expressive in front. In hand, he tended to get a bit too Trakehner with a softer hind leg, but in freedom he certainly showed to have a good engine. He walked well. Conformation wise he had a lovely topline but he has a frontleg with a slightly offset cannon bone. At the auction, this stunning beauty sold for the top knock down price of 755,000 euro to Rebecca Gutmann of Gestut Bonhomme. She won the bidding duel from Lone Boegh Henriksen/Paul Schockemohle. 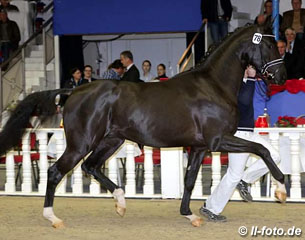 The reserve licensing champion was the very strapping, black Totilas x Don Frederico x Sandro Hit x Espri. Bred and owned by Paul Schockemohle, this black colt definitely impressed with strong, active hindquarters in trot. He is a little bit long in the back and the topline could be tighter. His walk was good in ground cover but slightly quick in the rhythm. He was not offered for sale.

The third placed premium stallion was the stunning, bright bay Zack x Alabaster x Donnerhall x Pik Bube I, bred by Brood Farm Bauer and owned by Blue Hors Stud in Denmark. This stallion had a gorgeous face and looked very athletic. He probably had one of the best trots at this year's licensing with a super hindleg and much lift in the shoulder. The canter in freedom had good suspension and an active, scopey hindleg. Unfortunately the walk was very mediocre with the stallion regularly becoming lateral and pacing his way through the ring. Still the licensing committee did not seem to care about that, as they placed him third with a premium. He was not for sale. 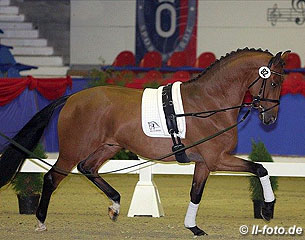 Four stallions tied in fourth place in the premium ring. The stand-out one was probably the very tall, lanky Damon Hill x Sandro Hit x Archipel, bred and owned by Theo Binder. The stallion was quite the impressive mover with much candence in trot and power from behind but there could have been more articulation of the joints. The walk was ok in rhythm but there should have been more ground cover. After a very long, almost boring bidding duel with inclinations of 1,000 euro per bid, the stallion sold for the whopping price of 182,000 euro to the Neustadt/Dosse state stud. From his first crop of foals, Destano was able to get two offspring in the premium ring and all three selected colts licensed thanks to a generous committee. The three Destano offspring in Vechta looked quite old fashioned with a flat front leg. The Destano x Argentinus x Welt Hit II chestnut colt, bred by Dirk Schnieder and owned by Stevens Sport Horses, was a solid mover, but lacked suppleness and roundness in his trot. The walk was not stellar. He sold for 60,000 euro to Jurgen Koschel. The chestnut Destano x Pik Noir x Quattro B was the more eye-catching one of the two, but this one didn't have the prettiest set neck. Still he moved well in trot with good swing in the back. He had the strongest hind leg, but easily lost clarity in the rhythm in walk. He sold for 70,000 to the Celle state stud.

The fourth fourth ranked premium stallion was a poster boy by Bretton Woods x Weltmeyer x Bogenschütze, bred and owned by Stefan Tietje. This dark bay stallion was absolutely beautiful with a lovely face, gorgeous neck and overall appealing looks. The canter in freedom appeared disconnected and in trot he was very slow in his movement mechanism. The walk was good. He sold for 160,000 euro to Ann Kathrin Linsenhoff. 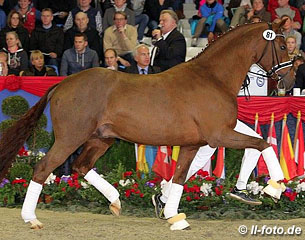 One of the eye catchers of the Oldenburg licensing was the 3-year old Westfalian bred Vitalis x Diamond Hit x Landadel x Argentinus, bred by Rotraud Haarlammert and owned by Felix Tiemann and Schwierking. The chunky chestnut was already qualified for the 2013 Oldenburg licensing but was not fit at the time. He also did not show up at the 2014 under saddle licensing in April so made his third try at the 2014 licensing. The stallion showed much maturity and muscle, considering his age, but it also proves the point that it's better for the horses to do a licensing with 3-year olds instead of setting the age limit at 2,5-year olds when they are still babies. The Vitalis had fabulous gaits. He was very impressive, strong and supple in trot and the canter was well carrier. The stallion was a bit unstable in the loins/sacro-illiac though. In walk he had good rhythm but not the biggest ground cover. He sold at auction for 310,000 euro to Andreas Helgstrand. 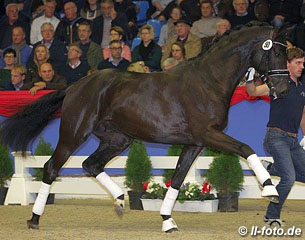 The collection included a few more very interesting sport horses. The chestnut Bordeaux x De Niro x Plaisir d'Amour was a lightfooted mover despite considerable body mass and he had a very functional hind leg but was slightly weak in the loins. He was not licensed.  The black Cennin x Florencio I x Feiner Stern raised mixed emotions. He performed poorly on the lunge line, but impressed in freedom with powerful, quick hind leg activity. During the auction he moved very well in hand so state stud Redefin won the bidding duel from Helgstrand with 105,000 euro.  The lovely licensed black Don Schufro x Romanov x Ferragamo stood out with his supple trot and ground covering walk (which could be purer in rhythm). He sold for 110,000 to Celle State Stud.  Helgstrand presented an impressive bay Foundation x Furst Heinrich x Verdenes with a very powerful trot but the horse carried a stiff tail.

Oldenburg licensing champion Furstenball only had two offspring in this year's licensing. The one out of dam sire Sevillano xx did not convince, but the bright bay colt out of a Rohdiamant x Feinbrand mare turned out to be a wonderful youngster with a beautiful front, nice size and supple gaits. He sold for 65,000 to a Hessian dressage stable.