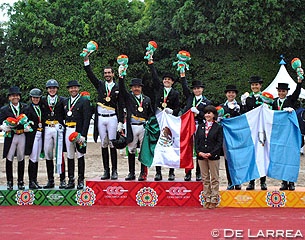 The Mexican dressage team with Bernadette Pujals, Mariana Quintana, José Luis Padilla and Omar Zayrik capped year long preparations with a phenomenal triumph of team gold at the 2014 Central American and Caribbean Games in Veracruz, Mexico, on 18 November 2014. The competition was so exciting that even the president of Mexico’s national Dressage Committee was jumping for joy. Colombia finished in silver medal position and Guatemala got bronze after the scores of the Prix St Georges and Intermediaire I were combined for the team ranking.

The day started out slightly cloudy. The starting order for Intermediare I was the same as for the Prix St Georges, but the atmosphere in the Coapexpan Riding Club was much more excited, tense, nervous and lots of worried faces could be seen in the larger crowd. Everyone was following every step the horses made. From the very beginning of the day everyone knew that the Mexican team would give their all to snatch the gold away from Colombia, who were the overnight leaders. It became a no holds barred situation to get the gold medalas it has been 12 years since Mexico won a team gold at these Games.

The first up was Mexican Omar Zayrik with the military bred Presuntuoso, who scored a much better result than in the Prix St Georges, a 65.527%. After him came one of the young future promises of the region, Colombian Radmé Mahamud with Highlander. This horse was Raúl Corchuelo’s former mount and now  scored 63.921%, improving slightly from their previous mark. It was curious to note that even though  Inter I is a much more difficult test than Prix St Georges many riders were more comfortable in this test and considerably improved their scores. The Inter I requires full canter pirouettes, a canter zig-zag and two series of flying changes, every three and every two strides. In the first group of riders was Alida Coburn from Venezuela who scored 58.237% because she had problems especially in the pirouettes and resistance in the changes. A Mexican judge explained that the Inter I separates the horses that can truly collect and tests the riders's coordination for flying changes more. After Coburn there was Andrea Schropp from Guatemala, who surprised as she seemed a completely different combination executing super flying changes.

When the ever smiling Mariana Quintana entered the ring for another Mexican effort,  the atmosphere in the Coapexpan club became much more tense and excited with the home crowd in the audience. The public received Mariana with a brief ovation, no-one wanted to go over the top. She shone out in her test as she was very relaxed, soft and precise. Even her much criticized walk was excellent, it was very relaxed. The canter zig-zag was a highlight. When she finished the public could not contain itself and applause resounded in the arena. Mariana was visibly relieved and very happy, she hugged her horse Benzemá and left the arena. Her score was 66.421%.

Marco Bernal, the second rider from Colombia and a very experienced one who scored 71.105% in the Inter I with Farewell IV at the 2011 Pan Am Games in Guadalajara, could not pull out the same precision in Veracruz. It was a much more difficult day for Marco, some changes were not on time and after the extended canter there was a miscommunication with the horse that caused him to drop out of canter. He had to use stronger aids to get the horse’s response and so his score was 65.421%, slightly lower than his PSG score of 67.658%. Grand Prix rider Yvonne Losos de Muñiz, from Dominican Republic and winner of the individual bronze in the 2007 Pan American Games in Rio, scored 65.474% on her new horse Foco Loco W. With her concluded the first group of riders.

The second group began with Michelle Batalla-Egerström riding a lovely Danish mare with a nice small, shapely head, but with a lot of character. The mare struggled with her concentration and Michelle got a 61.132%. Irina Muro from Venezuela scored 64.105% and Margarita Castillo from Guatemala obtained 65.211%, considerably better than her Prix St Georges test. The only rider from Honduras, Karen Atala, got 61.132%.

Finally it was the turn of Mexico's star rider Bernadette Pujals. Her mare Aurora El Camino looked very well connected, calm and willing. From the moment the judge at C rang the bell, everyone grew quiet and turned their rapt attention to the combination. The audience saw a difficult test performed by an expert who knows how to ask her horse for what she wants. Bernadette rode Aurora for all she's worth. Pujals remarked later that Aurora has a lot of character, that she tends toward willfulness, but she’s not an easy horse. In the first halt the mare was not square, then later in the rein back she hesitated, but in the canter movements after the walk the mare was visibly more relaxed and enjoyed the work. The flying changes had quite a bit of jump, the pirouettes were very collected and in place, the extensions were ridden with impulsion and all through the test the mare was always on the vertical. Bernadette is one of those riders that is soft with the curb bit, her rein always has a little bit of slack. The final trot extension and halt were perfect. When she finished with her salute the audience broke into cheers and applause. Bernadette had a big smile and was visibly satisfied. She knew she’d done her best and the results proved it: 70.947%. Yet again Berna squashed the competition. Virginia McKey, the only rider from Bermuda, scored 62.053%. The 17-year old Marco Bernal Junior from Colombia outshone his team mates and scored 67.869%, the second best score so far. Quite a feat for so young a person. After him came another young lady Ami Egerström, from Costa Rica, who demonstrated she’s one with her horse Amorino. She scored 65.790%.

Alejandro Gómez from Venezuela was next with the stallion Drakkar Noir, which is one of the most beautiful horses of the competition. They scored 64.237%. Sylvia Luna from Guatemala slightly improved her marks to a 64.869%.

Mexican José Luis Padilla's Donnersberg was spooked by the applause upon entry and did a double take, turning on his haunches with the intention of running away. José Luis got him in hand and the public quieted down after witnessing the horse's extreme reaction. Although José Luis did his best, Donnersberg was not happy and rather tense with an error in the flying change after the extended canter. They scored the lowest of the Mexican delegation: 63.00%.

Puertorican Luis Reteguiz Denizard and Yvonne Losos de Muniz' former ride Royal Affair performed royally in the Inter I and scored 68.579%, very close to their Prix St Georges score and the closest yet to Berna. The last combination from Colombia, Raúl Corchuelo and the Hanoverian Beckham, were considered capable of challenging Pujals and were cheered on by his large group of Colombian fans.  At the beginning everything looked well, but when the canter movements began the horse started to resist. He did not want to perform the pirouettes, refused to change lead in the last series of changes and when they got to C for the transition to trot the horse just plain did not want to continue, Raúl had to apply some strong kicks and everyone just suffered along with him. From being ranked second in the Prix St Georges, he went to the bottom of the scoreboard with 57.500%. The pressure must have got to him.

With only two riders left, everyone just wanted to know the results, after such a terrible performance from Raúl all Mexicans could feel the gold medal already. Cristobal Egerström from Costa Rica, who actually rode for Mexico in the 1984 Olympic Games, was the penultimate rider. In the Prix St George he was outdone by his daughter, but this time he came out the better rider with a score of 63.366% even though his horse Bello Oriente bobbed his head in the canter pirouettes.

The Venezuelan Irina Moleiro was the last rider and such was the anxiety felt by everyone that even the announcer forgot she was yet to pass. Irina paid no attention to the situation and rode her test very well and scored 64.737%.

Finally the test concluded and everyone from reporters, public, judges, secretaries, riders were all waiting with great expectation, impatient, for the final results from Irina and the overall team scores. While the arena staff put the podium and red carpet in place, the score technicians made everyone wait.

For the Mexicans in the know the gold was a certainty, but until the final results were announced it was still speculation. Then came Antonio Rivera, Mexican team trainer and a former team member, from the Appeals Committee and confirmed that Mexico won gold. The announcer echoed the placings and the Mexican team had imposed themselves on the competition and obtained the very much yearned after team gold medal. In silver place was Colombia and the bronze went to Guatemala.

by Eugenia de Larrea for Eurodressage