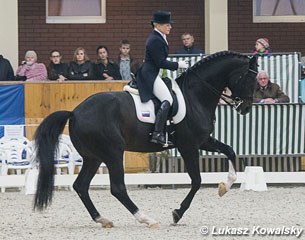 Russian routinier Elena Sidneva and her dark bay Romeo Star took out the Grand Prix Kur victory at the second CDI in Zakrzow, Poland, this year on 7 - 9 November 2014. Dressage in Poland is on the rise with no less than 5 CDI's in the country in 2014. Zakrzow kicked off the season in April and concluded in November.

A large field of Grand Prix riders gathered in Zakrzow to contest the big tour. Austrian Karin Kosak won the Grand Prix with Florentino, a horse she recently brought back from injury and straight into the winner's circle. They scored a winning 68.240%. The Grand Prix Special was won by Polish Aleksandra Szulc on her beautiful dark bay Rumba Hit with 69.824%. Sidneva and Romeo Star swept the Kur with 71.650%.