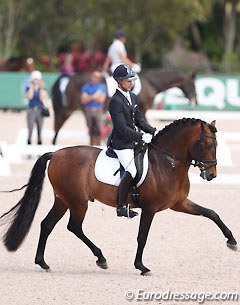 The United States PRE Association (USPRE) is pleased to announce the winners of the inaugural Copa USPRE, and the USPRE Dressage Team for 2015.

The Copa USPRE is a national Breeder’s Cup Dressage Championship for the FEI levels, similar to the successful Copa ANCCE in Spain. Riders and horses are ranked nationally at the FEI 5 and 6 Year Old levels, Para, Small Tour and Large Tour once they have met certain minimum requirements. Champions and Reserve Champions are determined by an average of scores earned at rated national and/or international shows and receive automatic invitations to participate in the Copa ANCCE Finals at SICAB in Spain. Additionally, the roster of Champions and Reserves make up the USPRE Dressage Team for the coming year, during which each pair will receive a sponsorship from USPRE.

In this first year, over 40 pairs from around the country signed letters of declaration to compete for the Copa USPRE, and the winners posted competitive scores at their respective levels. USPRE is proud to promote the American riders and PREs who are representing our breed at these high levels in open competition. We congratulate each for their success this past year.