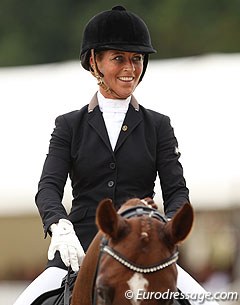 The 35-year old Bache has been living and working in Germany for more than a decade moving from Norway to Germany as a 20-year old. First based at Roger Seegert's and then settling with Holga Finken, Bache has been very loyal to her long-time trainer and boss and followed Finken to Gestut Bonhomme in July 2013. When Holga called it quits there, Bache moved to Muhlen in September 2014.

"I was with Holga for 15 years, so I'm a bit sad, but he is still my trainer and comes regularly to Schockemöhle's stable," Bache told Eurodressage. "Bastian and I brought some future horses from clients with us."

At Schockemohle's, Isabel still has room for her own clients and horses. She has retained the ride on the promising young licensed stallion Van Vivaldi (by Vivaldi x ) and is currently working out a plan which stallions she will ride for Paul though she could not yet cite definite names.

"We are slowly working out which stallions I'm going to keep for the future," she explained.

While Bache has been very active competition rider in Germany competing at numerous Bundeschampionate, her international starts are less frequent though not less successful. Aboard Riverdance she won the small tour at the 2014 CDIO Aachen and they finished third in the 2013 Nurnberger Burgpokal Finals in Frankfurt for Developing Prix St Georges horses. She has competed several horses at the 2014 World Young Horse Championships, including Du Soleil, De Nino, Bergerac, Donna Rubina and JJ Rocco.