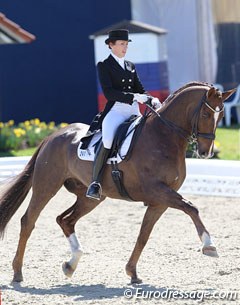 "I'm so very excited," Oatley told Eurodressage. "He's an amazing horse and belongs to my mother and grand father, Rosalind and Robert Oatley."

Du Soleil is a 2004 born Hanoverian gelding bred by Sven Kahrens and previously owned by Flora Keller. The chestnut gelding is by De Niro out of Capri Sonne (by Caprimond x Wenzel I x Eisenherz I).

The horse first came into the spotlight when it got selected to represent Germany and the Hanoverian society at the 2010 World Young Dressage Horse Championships in Verden, Germany. Trained and competed by Austrian Saskia Lieben-Seutter, Du Soleil finished 11th in the 6-year old Finals with a score of 7.82. One month later the pair finished 13th in the 6-year old finals at the 2010 Bundeschampionate with a score of 7.40.

Right after the Bundeschampionate Du Soleil sold to Sven Rothenberger but the horse was returned to the original owner after several months. Lieben-Seutter continued to train him and the duo reappeared in the show ring two years later in 2012 at M and S-level. In 2013 they finished 7th in the Prix St Georges at the CDI Hagen and did two more national shows at small tour level in Walldorf and Elmlohe.

Lieben-Seutter and Du Soleil were based at Holga Finken's yard, where Kristy Oatley tried out the horse and bought it as rising Grand Prix star. 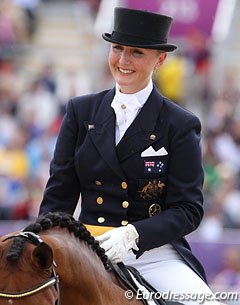 "He is at home with me in Hamburg," Oatley explained. "Düse will travel back and forth to Sjef's with the other horses for training. I have no show plans as yet."

Australian Kristy Oatley lives in Hamburg, Germany, and trains with Sjef Janssen in The Netherlands. She represented her home country at the 2012 Olympic Games aboard Clive, a Holsteiner gelding by Caletto I x Landgraf I.

Kristy currently has four Grand Prix horses for 2014. The more experienced 11-year old Ronan (by Riccione) and the 10-year old Louisa (by Londonderry x Lemon Park) as well as the developing Grand Prix horses Qualia (8yo, by Quando Quando x Duntroon) and Swagman (9yo, by Sandro Hit x Don Schufro).

"They are all very special," said Oatley. "I have had all of them since they were born or up 4 years old. I have a great support crew with Aaron Quinn as rider and my family."