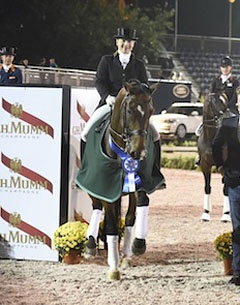 Isabell Werth and El Santo became the winners of the the inaugural $40,000 Central Park Dressage Challenge on Saturday 20 September 2014. This Grand Prix dressage class was an invitation only event, full expenses paid, and served as "demonstration show" during the international show jumping competition in Central Park, New York.

The United States' Steffen Peters brought his superstar mount Ravel out of retirement for one special freestyle, and Jan Ebeling retired his famous mare Rafalca after the duo had their final performance together. It was an incredible night celebrating the beauty, grace, and power of dressage.

Performing their freestyle in Trump Rink with an incredible backdrop of skyscrapers in the New York City skyline, Isabell Werth and El Santo NRW received a score of 82.042% from the judges to take top honors in the dressage challenge. Dutch rider Hans Peter Minderhoud showed his mount Flirt to a score of 78.833% to finish second, and Canada's Karen Pavicic and Don Daiquiri scored a 73.500% to place third.

El Santo NRW is a 13-year-old Rhinelander gelding by Ehrentusch x Rythmus owned by Madeleine Winter-Schulze and Isabell Werth. The rider has had great success with the talented horse in Europe and decided to bring him to the United States for the first time for this very special evening.

"I have to say thank you in the name of all riders for the great idea for this event," Werth stated. "In the beginning when I heard it, I couldn't believe, but I was waiting to see if it was really coming true, and it really came true. I say a big thank you. It is a special event. If you go here through Central Park and if you arrive in New York, you can't imagine that you will compete here in this arena. It was a lot of fun and a pleasure to be here." 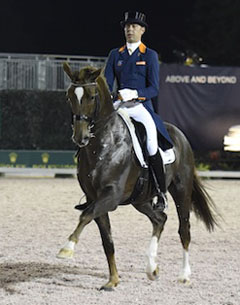 "You need a special horse also, who can deal with the atmosphere here," Werth added. "I'm really pleased with 'Ernie.' He did a great job. I did a really good freestyle, and I am completely happy. I had great days here; it's my second time (in New York), but this was a special time here. It was like holidays with my horse. We are happy to come back!"

Werth also commented on the great atmosphere of the venue, which is unlike any other. "The really most impressive view is if you see the skyline from that point of view," she stated. "If you are in the ring and you look around, this is really unbelievable, especially when you come from Germany! It's a completely different arena or event or atmosphere to a normal show. It is something special because you are in the middle of New York. We have no other show where it's in the middle of skylines and atmosphere like this. This is really unique and special."

Hans Peter Minderhoud came to New York for the very first time for Saturday's competition and was also impressed with the park setting.

"The arena is really amazing. Of course in Europe we have some great venues, but the big difference is for our horses," Minderhoud stated. "You need a bit of a special horse. They came here this morning, and you're not in the arena a lot. It's tricky to go through the park, but my horse coped really well with it. I was very happy with the test. He had no mistakes, and he was really trying and going for it. For me, it was really wonderful to be here. It's my first time in New York. As Isabell said, a big thank you to the organizers. We had a wonderful week, and it's so nice to be in the city. I think we'll definitely come back next year."

Pavicic stated, "I'm thrilled to be here, and it's an honor to be third amongst these two great rider here. I'm thrilled with my horse. It's been a fantastic journey this year, for sure."

Along with the evening's freestyle competition, dressage star Steffen Peters brought his famous Olympic and World Equestrian Games partner Ravel out of retirement for one special performance. The 16-year-old Dutch Warmblood gelding last competed with Peters in 2012 after a career that launched them to the front of the world dressage stage, including an individual fourth at the 2008 Olympic Games in Hong Kong, wins in the 2009 World Cup Final (Las Vegas) and the 2009 Aachen CDIO (GER), two bronze medals at the 2010 World Equestrian Games (KY), and two U.S. Equestrian Federation National Grand Prix Championship titles. The exciting evening at Trump Rink showcased the world-renowned duo for one final performance of their award-winning freestyle. 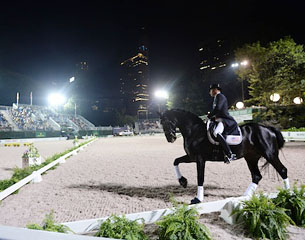 Ravel has spent the majority of his retirement at owner Akiko Yamazaki's Four Winds Farm in Woodside, CA. When Yamazaki called to tell Peters about the idea to bring Ravel back for one night in New York, Peters knew it would be a very special opportunity.

"We were in Europe when I heard about this wonderful idea that Mark and his team put together so perfectly. I was already in France when Akiko called me and she said, 'Guess what? You and Ravel are going to New York and you're going to show there.' I said, 'Ok, great! Let's do it!' It's very exciting to be here," Peters acknowledged. "I am so proud of Ravel. Even being two years in retirement, he just gave all of his energy and expression that he had in the time when he was in his prime. I'm super excited to compete here. I'd love to get a chance to come here next year. It was awesome."

"He was already so excited this afternoon when we had familiarization (in the ring)," Peters said of Ravel's experience. "He is such a fun horse. It's nothing to do with work. People tell me, 'You make it look so easy.' He just wants to do it. Going forward, he's so wonderful in the bridle and still so elastic. To get to ride him once more in a freestyle is so extremely special. It's really hard to put in words what Ravel really does for us. To show him, in what I like to call the center of the world, is really special. Central Park is just amazing. What a special feeling tonight."