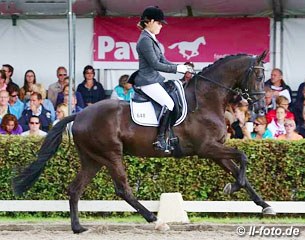 2014 European Young Riders Champion Anne Meulendijks and her young sister Lotte, a member of the Dutch Junior Rider Team, will be joining the dressage team of riders at Rob van Puijenbroek's De Begijnhoeve in Retie, Belgium.

Anne has been riding Van Puijenbroek's 4-year old Ferrari (by Wynton x Contango) and tied in 5th place in the 2014 Pavo Cup Finals in Ermelo. This success has led to an extension of their co-operation and the decision to bring the Meulendijks' girl permanently to Rob's yard in Belgium.

Anne and Lotte will be moving in on 1 October 2014. They will continue to ride their own horses as well as train and compete horses bred and owned by De Begijnhoeve

Anne Meulendijks rode at Tineke Bartels' Academy from 2011 till 2013, but switched back to her pony coach Tommie Visser this year.