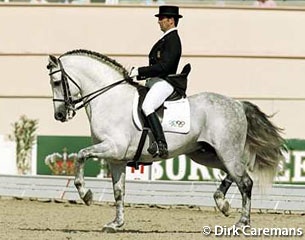 Legendary Spanish PRE dressage horse Evento has passed away at age 29. Under Ignacio Rambla, Evento was one of the key horses that brought Spanish dressage to a world stage at the 1996 Olympic Games in Atlanta.

Together with Invasor and Distinguido, Evento was one of the most important horses PRE horses to launch dressage in Spain. He was nick named "the Icebreaker PRE."

Bred at Yeguada Militar, Evento was born in 1985 and was sired by Leviton. He arrived at the Real Escuela in Jerez de la Frontera as a 3-year old and first came to Ignacio Rambla's attention with student Joaquin Vazquez. In 1994 Alvaro Domecq matched Evento to Rambla and an unforgettable partnership started. 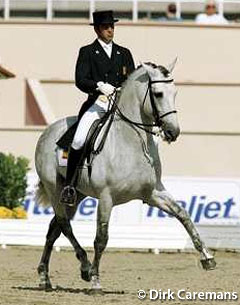 Evento's most famous offspring was Distuinguido, which won team bronze at the 2003 and 2005 European Championships.