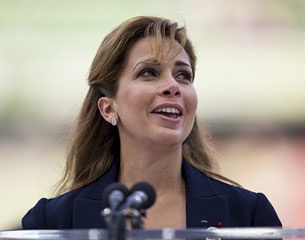 FEI President HRH Princess Haya officially closed the 2014 World Equestrian Games in Normandy at the D’Ornano Stadium this evening, bringing to an end two weeks of incredible sport. The final medals of the Games were presented by IOC Member, Tsunekazu Takeda, Vice-President of the Tokyo 2020 Organising Committee and Member of the FEI Olympic Council, to Jeroen Dubbeldam of the Netherlands who took the Jumping title after a thrilling Top Four final.

Around 570,000 people came to the Games, more than 230,000 people visited the Games Village, and around 50,000 attended the Alltech Music Festival that ran on eight nights during the Games. A total of 3,000 volunteers provided support for the Organising Committee.

Almost 1,800 accredited media from 52 countries sent coverage of the Games around the world across all media platforms - broadcast, print, online and social media. Over 1,000 hours of broadcast coverage for the Games were beamed to more than 200 territories on television and globally via digital platforms to a global television audience of 500 million.

In addition to massive coverage in the traditional media, the Games were a huge success across all social media platforms, including the FEI’s YouTube Channel, which exceeded 5.5 million views during the Games.

The FEI also held its first ever FEI Observers Programme, with high-level delegations from Rio 2016 and Bromont 2018 visiting the Games, and the first ever FEI World Equestrian Games Experience for potential future bidders for the Games, with representatives from Japan, Australia, Ireland, UAE, Qatar, UK and Denmark.

During the final moments of the Games closing ceremony this evening, Laurent Beauvais, President of the Normandy 2014 Organising Committee, returned the FEI flag to Princess Haya, who in turn handed it on to Pauline Quinlan, Mayor of Bromont, the Canadian city that will host the Games in 2018. The Canadian anthem was played as the Canadian flag was paraded around the arena by members of the Bromont/Montreal 2018 Organising Committee.

In a poignant message to a packed stadium, still buzzing after the excitement of watching local hero Patrice Delaveau take individual silver, Princess Haya offered the thanks of the equestrian family to Normandy and to France for hosting the 2014 Games.

“This is the final time that I will stand before you at a World Equestrian Games as President of the FEI,” she said. “This is a hugely poignant moment in my life. And I will leave this stadium tonight truly knowing the measure of the gift that you have given the sport I love. Thanks to Normandy and thanks to France, I now know our beloved sport is where it should be.

“When the rest of the world looks at France, we see Freedom, Equality, and Harmony through brotherhood. (Liberté. Égalité. Fraternité.)

“You have given our athletes the freedom (Liberté) to compete fairly and without reserve, while putting the welfare of the horse at the heart of all that they do on this beautiful stage.

“You have witnessed the equality (Égalité) that only the horse can bring, to men and women, to young and old, to able bodied and the less able. And you have provided a stage to celebrate the bond between a horse and rider which represents one of the purest kinds of love, the bond of brotherhood (Fraternité).

“Thanks to you, the French people, our sport is now strong, proud, and you have given it the freedom to roam the world, as horses have since the beginning of time itself. This spirit of the beautiful region of Normandy, this spirit of France will forever live on in our hearts. Thank you, Normandy; thank you, France.”

At the end of her speech, a visibly emotional Princess Haya, with tears running down her face, gave the final words of the Games: “And now, it is my duty to declare the Alltech FEI World Equestrian Games 2014 in Normandy. . . .closed.”