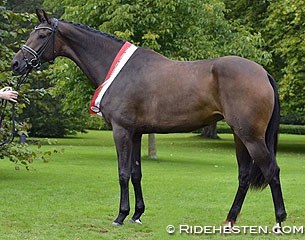 The Danish Warmblood Elite Mare Show came to an end conclusion on Sunday 31 August 2014 with the exciting final of the 3- and 4-year-old mares and the appointment of the two champion mare titles.  Lillevangs Pari-Diva became Dressage Champion Mare.

"She is a large-framed and beautiful mare that has the highest riding test result of 2014 - 887,5 points. She received a 10 for her canter. The mare comes out of the famous Pari damline and is being prepared for a sport career under Jan Christensen, who has already qualified Lillevangs Pari-Diva for the semi-finals of the Danish dressage championships this year," said the press officer of the Danish warmblood society.