Yes We Caen: The End is Nigh 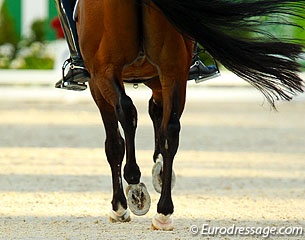 The last day of dressage at the 2014 World Equestrian Games is nigh. It has been a thrilling week and though I anxiously anticipated the work load it has been much better than expected. The working conditions have been fine, the traffic more than alright, my hotel is nice, there are plenty of good restaurants close by to refuel the body and there has been great sport to nourish the mind.

The judging has been good, most of the riding a pleasure to watch, the options for touristing have been great here in Normandy with castles, beaches and historic landmarks all over. What is there to complain about? 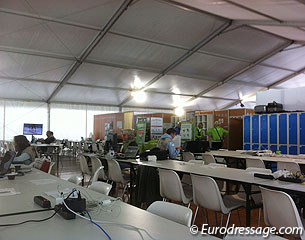 I arrived in the press centre early on Friday morning and my good mood changed immediately when I heard some journalists connive. "The judges rang the bell strictly with Adelinde on purpose, they did it twice at this show so far. That's not a coincidence," was one of the remarks I heard. "You should see what would have happened if that bell ringing had happened to a German rider," the person added. Another one that amazed me was, "Isabell Werth withdrew her horse on purpose as she knew she was going to be doping tested if she won an individual medal." Well, that one definitely doesn't make any sense because also a team medal winning horse can be subject to a doping test and Werth won team gold (the FEI rule says that at least one horse will be tested from each of the medal winning team). It's strange that this nationalistic feud between Holland and Germany still hasn't been eradicated from the dressage world. With the coming of great rider-and-horse combinations from Great Britain, Sweden, America, Austria and Italy you would say those days were numbered, no?! Thursday was a day off for the dressage riders and I wanted to spend it on exploring Caen. The day definitely did not go as planned. I ended up working in my hotel room till 14h00, writing articles and editing photos for the eager masses craving for input. Then I closed the computer, grabbed my bag and booked and walked into two. It takes me about 15 minutes to reach the Caen castle grounds, but I diverted to some side streets where all the shops were. I just went window shopping, not in the mood to spend money on stuff I don't need. I then headed to the castle and climbed the walls. I expected a big fortress with an original keep like the Tower of London, but the actual castle of William the Conquerer were just ruins. Still it wa impressive to see. While I climbed the steps to walk the wall I crossed Steffen and Shannon Peters but they didn't see me so no time for chit chat. 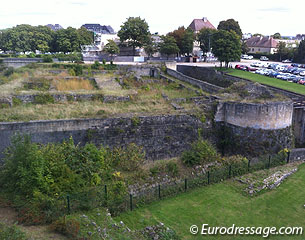 After browsing round the castle grounds I was in need of some food and wanted to find a fun, cosy restaurant. The only places I saw were just cafés with crepes and I definitely was not in need of a sugar rush. It took a while before I found something really quaint, a small Iranian place where I had a plate of moussaka. It was yummy. I received a phone call while having lunch (at 16h) with an urgent request for photos so that was the end of my day off. I walked back to the hotel, picked up some nectarines at the supermarket, which turned out to be totally unripe and as hard as a stone. From 16.30 till 21h I slaved away at the computer and did make great progress. All my photos were organized in folders so I had a great sense of accomplishment at the end of the day. 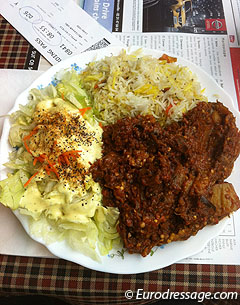 I decided to go for a late evening dinner at the local Italian place which is just three houses next to the hotel. I had dinner there on Wednesday and the owner of 'Ristorante Torretti' was super friendly and chatty. He originally came from Calabria, but now lives in Caen. I tried my best to speak Italian (three words) and he was amused, even more so at my very rusty French. I might live in Belgium (where the official languages are Dutch, French and German) but as a native speaker of Dutch, my French is not what it should be. I understand it well, can fake a very good accent, but I need to think quite hard to find the words and speak with a normal speed. I ordered a gnocchi oven dish and had a panna cotta for dessert. The food was nice, but not as authentic as what I eat when I go on holiday in Italy at my father's near Arezzo. Funny how national cooking changes depending on a country's taste. I've never had real proper Italian in Germany, for instance, and the other day I went to a Vietnamese place in Caen but that tasted like typical Chinese food, the European version of it.

The press centre is now slowly starting to fill up.. better get ready for the big time!