Yes We Caen: For Whom the Bell Tolls 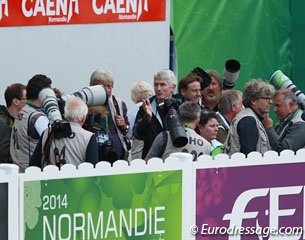 The past three days have been full on action at the World Equestrian Games with three consecutive days of competition. Working at WEG has been a wonderful experience so far, but there is a lot of grumbling going on in the press centre. I try hard to cope with hurdles and make the best of it, while others find relief in complaint, eye-rolling and whining.

The photographers have been given a lot of space to work in the stadium, with photo pockets all over and full access to the field of play (the area around the ring). The problem is that every day the rules change and the non-horsey security guys just follow orders from above and order us where not to go. Each day, you have to find a new way to your spot in the stadium, which usually involves a lot of stair climbing with 20 Kg + equipment. It's not fun, but you can accept it and stay friendly or scold at them and get tapped on the fingers.

Apparently some photographers became verbally and physically aggressive at the security on Tuesday, so that a crisis meeting was held with the head of media operations. It was quite interesting to see that happen with an Irish guy speaking at the top of his lungs to 300 people in the press centre, explaining the new rules of the day. Even though I personally have been involved in one scuffle (all of a sudden we were no longer allowed on the field of play at A), I solved it by accepting the fact and swearing a bit in Dutch, making ugly faces behind the back of this young boy who did his best to radiate authority.

On Wednesday Grand Prix Special day it all ran much smoother. The first few days of a big equestrian championships are always a bit bumpy, no matter where they are held (I remember even some security problems in Aachen at WEG 2006), but those ripples always smoothen out as the show progresses.. And if you get stressed, I just tell people to close their eyes and say ooooooohm. 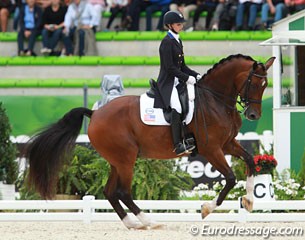 The Grand Prix Special was a fabulous class and like I wrote in my report, it feels like a new dawn of dressage has finally started. I'm so happy that the days of pulling are almost finally over. It has taken the judges years to finally see through all the flash, electricity and super spectacularly moving horses that inccorect training was at the basis of it. Now we see more and more horses that are beautifully ridden, soft in the hand and can be as impressive in their movement mechanism without a rider forcing them into learned helplessness. If you see riders like Langehanenberg, Vilhelmson, zu Sayn-Wittgenstein, Steffen Peters, and a new comer such as Laura Graves rewarded for their work it makes my heart flutter. Dujardin is also part of this new generation. Her contact may not be as light as the former five, and she certainly is riding on that Olympic halo points-wise, but there is no blue tongue nor a gaping mouth with her horse and harmony prevails over flash. I can only say bravo to the judges who have the guts to down score tense, mechanically moving horses and reward naturally swinging ones that are happy in their work. What a relief.

Another fact to notice is that these top horses, as soon as they finish the test and are given the long rein to leave the arena, they walk totally relaxed and at peace with themselves out of the ring. In the past some horses were unable to even halt! They piaffed in the end halt (and at the beginning) of the test and could not control themselves on the long rein; stressed out, jogging all the time and looking frightful out of there eyes like a deer caught in the head lights. At the time this was excused by "it's the tension you need for a top performance. Have you ever seen a top athlete smile and relax in their performance," remember those grand words. What utter nonsense they were. It has been proven that a relaxed horse can also shine and be totally fantastic and expressive in the ring without having to look like a jacked up eastern European steroid athlete.

I'm a bit sad about the fact that this has been the "WEG of Withdrawal" though. The competition would have achieved an even higher level had horses such as Totilas, Bella Rose, Undercover and Siro been in the running. However keeping your horses fit and healthy is as much part of the game as actually competing at the venue. 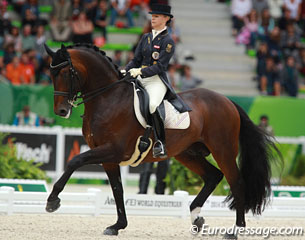 While I was working on my Special article I jotted down a few impressions which I wanted to mention in this blog as well. One of the not so serious things was that there is only rider who can actually wear beige in competition and look good: Victoria Max-Theurer. In the past especially male riders would wear beige breeches instead of white ones and it just looks aweful, but Max-Theurer's ensemble of beige breeches, short, stock tie and saddle pad are wonderful. The fashion police only allows her to wear it !

On a more serious level, post-Special the Dutch have raised hell about Susie Hoevenaars' strict and quick bell ringing in the class and filed a complaint with the FEI about Cornelissen's penalty score of 14 points as she entered the ring too late after the 45 seconds allowed. For the Special riders were no longer given a lot of time to travel round the ring and Hoevenaars consistently rang the bell as soon as they reached  the short side at C. It gives them right enough time to pick up the canter and enter the arena. This is not a new rule and all international competitors are accustomed to it.

Some riders who might have dilly-dallied going from the warm-up through the tunnel and into the main stadium heard the bill ring a bit sooner (some even as soon as they got to the short side at C). Cornelissen was ready on the spot to enter the tunnel, but late to go into the ring. She came out of the tunnel, then piaffed quite a bit at the exit of the tunnel, before heading to the ring when the bell rang straight away. She had her 45 seconds to prepare, but took longer. She went past the judges' box at E, piaffed there again before making her turn, then strike off to canter and riding on the centerline (video embedded in top right corner. See what happened). 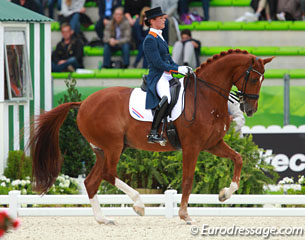 Afterwards the experienced medal winning rider blamed her not so strong first part of the test on the fact that she didn't have enough time to prepare herself. The Dutch Equestrian Federation lodged a complaint with the FEI, even though it will not make a difference to her score for her to win bronze. For them it's a matter of principle.  In an interview with Hoefslag ring master Pedro Cebulka was blamed for preventing her to enter the stadium.  Cebulka was quoted saying, "she was indeed ready a long time and entered the ring right on the second. I've been doing this for more than thirty years and I always allowed a combination to enter on time." It was a bit surprizing that Cornelissen officially complained as she has never been the athlete to blame outside forces for a lesser performance. She has always been an example of focus and self-reflection. Strange. None of the 29 other riders in the Special, for whom Hoevenaars also ran a strict bell-ringing, filed a complaint.

The Grand Prix kur to music is on Friday 29 August 2014 and starts at 13.35h. A new day, new chances for medals, also for Adelinde, as well as those knocking at the door (Vilhelmson, Max-Theurer, Graves). I'm not the biggest freestyle fan (as the judging system for it is just inadequate), but I'm looking foward to the finals!

It's a day off today (well I've already been working non-stop till 13h30 today) and now I'm going sight-seeing. My war quest in Normandy continues. After visiting Omaha Beach, the War cemetery and the Bayeux tapestry, I'll jump back into history to mediaeval times and visit the Caen castle of William the Conqueror.  My cup of tea!