Team Gold for Germany, Dujardin League of her Own in Grand Prix at 2014 World Equestrian Games 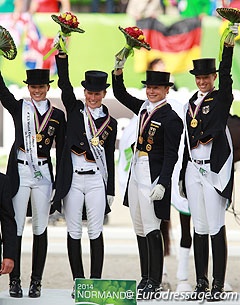 The German dressage team proved to be untouchable in the team competition Grand Prix class at the 2014 World Equestrian Games in Caen, France, on Monday and Tuesday 25 - 26 Augut 2014. However it was ruling Olympic champion Charlotte Dujardin who was a league of her own today, winning the class with 85.271% and spearheading the British team for team silver. The bronze went to the Dutch team after a fourth place from Adelinde Cornelissen.

Spectators were filled with trepidition, bracing themselves that Dujardin and the Dutch bred Valegro (by Negro x Gerschwin) would not imitate their failed Grand Prix test in Aachen.  Fortunately the ruling Olympic and European champion was focused and her horse definitely on the aids. Valegro looked stunning today and was clearly the best horse in a pack of 100 that contested the Grand Prix.

Dujardin started with a super balanced halt, powerful trot extensions and half passes. The first piaffe was superb but ridden a bit before the marker, Valegro had good lift in the passage and did not drag his hindlegs as he sometimes does. Only in the second passage Valegro should have shown more understep. Most of the time he was nicely closed in the frame and working from behind. The extended walk had one to two hooves overtrack but there could have been a bit more forward reach. The collected walk was clear and pure. The tempi changes were straight and uphill. The zig zag had much ground cover, the pirouettes were outstanding and the extended canter uphill. Dujardin was truly a league of her own in the way she presented her powerful horse. It looked beautiful, effortless and accurate. 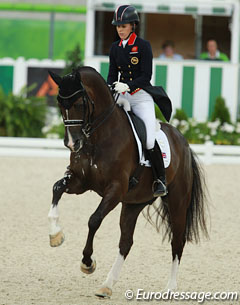 Helen Langehanenberg and Damon Hill (by Donnerhall x Rubinstein) were again their bubbly, sparkling selves. The German duo rode active, energetic trot extensions, a lovely half pass right but in the one to the left there could have been more hindquarters. The rein back was super  and the first piaffe-passage beautiful. Damon Hill probably has the best walk in the world and also in the collection he stays clear in the rhythm. He was a tiny bit sticky in the second piaffe. The two tempi changes were good, but in the ones he lost ground cover and forward motion. The zig zag was well ridden but the last change was slightly short behind. The final trot extension was excellent and on the final centerline Helen rode him carefully but with sparkle. Damon Hill, however, did his "thing" again and anticipated the halt, dropping out of passage. This mistake made Helen's score drop to 81.357% which placed her third, behind Isabell Werth on Bella Rose. 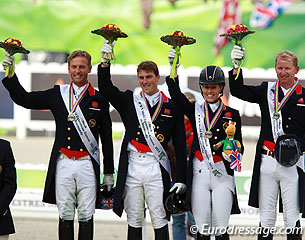 The German team was unbeatable at WEG this year with scores of 81.529, 81.357 and 78.814%. With a total of 241.700 points they were 10% ahead of the silver medal winning British team that finished second with 231.343 points. Britain could have scored higher but Michael Eilberg and Half Moon Delphi (by Dimaggio x Westwall) performed below par today and landed a 25th place with 71.886%.

Eilberg and Delphi already made a big booboo at the beginning of the test breaking into canter in the trot half passes. In the rein back the horse seemed to kick to the spur. The walk was very well executed. The passage was bouncy and the piaffe sweet but it could have been more energetic. The extended canter was big but a mistake happened in the one tempi changes. The final passage on the centerline was lovely but the mare was not immobile during the final halt.

The bronze medal went to the Dutch team with Adelinde Cornelissen and her 17-year old Dutch warmblood Parzival (by Jazz x Ulft) as anchor of the team. The duo scored 79.629% and finished fourth. She brought Holland's total to 227.400 points, helped by Minderhoud's 74.357% and Van Silfhout's 73.414%. 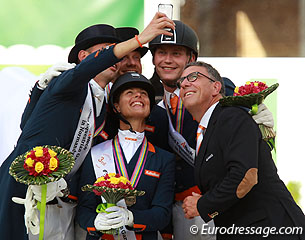 Cornelissen and Parzival seemed to have recovered from remarkably weak rides in Aachen, where the horse suffered from the heat and looked very uncomfortable in the show ring. In Caen he was fresh and willing again and Cornelissen hand-controlled him in the mouth as usual. All the extensions, both trot and canter, were ridden with much power and overtrack, but with the horse visibly crossing the jaws and opening the mouth wide. The trot half passes were nice, but the second and last trot extension were not entirely regular in the rhythm. The passage was buoyant and expressive, sometimes the hind legs moved too much out from under the body. The first piaffe was rhythmical, the second absolute world class, but the passage following was barely forward and looked sticky. The extended walk was good in overtrack even though the rhythm was not the best. The tempi changes were again highlights: straight, uphill and ground covering. The zig zag was also huge, but the pirouettes were slightly underwhelming, especially the left one in which he dropped on the forehand (yet they were small). The final centerline was very expressive and rhythmical, but from the hindview the horse was crooked to the right. Cornelissen scored 79.629% with 77.600 (Judet) as low score and a 82.100 (Verbeek) as high score.

The Dutch drop score surprisingly came from Edward Gal who was unable to bring out the best in his Dutch stallion Voice (by De Niro x Rohdiamant). The gorgeous black stallion is an impressive horse with a cresty neck and Edward did a wonderful job presenting him, but the stallion was just not the happiest camper. His mouth was open, tongue showing and Gal did not seem to be able to touch him in the piaffes, which looked dodgy and flat. In the second piaffe the horse stalled. The passage was off the ground though and the half passes energetic but the hindquarters trailed. In canter, Gal rode good two tempi changes and a well structured zig zag. The ones started out effortlessly but then a mistake happened. The pirouettes were small and the right one was really nice. Gal finished with 72.414% in 22nd place. 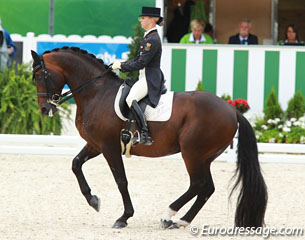 Austrian Victoria Max-Theurer rode a personal best score of 77.114% to finish sixth. Her big massive stallion Augustin (by August der Starke) as very solid in his work. The trot extensions have good lengthening but he could be quicker behind and even more impressive if pushed a bit more. The passage was lofty, the piaffe has tremendous sit but could be more quick and electric. The extended walk was good, the collected lateral. The pirouettes were a highlight.

Swedish Tinne Vilhelmson and Antonia Axson Johnson's Hanoverian Don Auriello (by Don Davidoff x White Star) slotted in seventh with 76.186%. The gorgeous gelding is scopy in front and tracks up behind in the extensions, but today the regularity was a bit compromised. The extended walk was outstanding and in passage he was more active behind than usual. The piaffe was nicely on the spot but the horse lost its confidence in the transition out in the first piaffe. In the two tempi changes one change was short behind. In the ones he sways too much in the hindquarters.  The pirouettes were small. 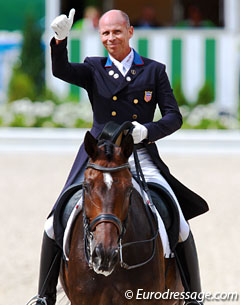 Steffen Peters and Akiko Yamazaki's Legolas finished eighth with 75.843%. America's star duo struggled a bit with the regularity today, especially in the trot extensions and half pass right. The half pass to the left was much more elastic and scopy. The passage has much airtime and really comes off the ground. Also in the piaffe, the bay gelding picks up his feet, though in the first piaffe he tended to put the left hind leg backwards instead of thinking forward. The extended walk could have shown more overtrack, but the collected was really pure in the rhythm. In the pirouettes, Legolas leaned a bit on the forehand today. The two tempi's were nice, but in the ones two big mistakes happened, which reduced the score from a 78% to a 75% score. Team mates Laura Graves and Verdades impressed as well by finishing 10th at their first World Equestrian Games. The duo scored 74.871 and still has room for improvement.