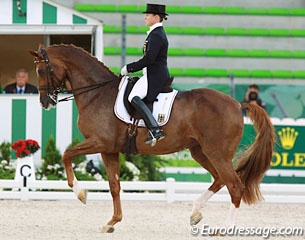 Isabell Werth has taken over the provisional number one spot in the Grand Prix ranking after the morning session on the second day of competition at the 2014 World Equestrian Games in Caen, France on Tuesday 26 August 2014. Werth and Bella Rose (by Belissimo M x Cacir AA) were the first pair to go today and set the bar high with an 81.529% score.

Werth has Bella Rose on outstanding form, showing further improvement in several movements, including the piaffe, which is more balanced and on the hindquarter than a month ago. The extended trot is still the weakpoint as the mare has much scope in the frontleg but gets unbalanced, quick and hasty without achieving sufficient overtrack. There was a mistake in the rhythm in one of them. The half passes were fantastic, the first piaffe two meters before the marker but rhyhtmical. The extended walk had two hooves overtrack but there could have been more downward stretch. The collected walk was good. The two tempi changes were straight but could have more uphill tendency. The extended canter was big and scopy. Werth miscounted herself in the zig zag. The one tempi changes could be more ground covering. The left pirouette was the better one. The right one was slightly flat and there could have been more bending.  Werth's scores ranged from 79.200 (Judet) and 83.700 (Verbeek). 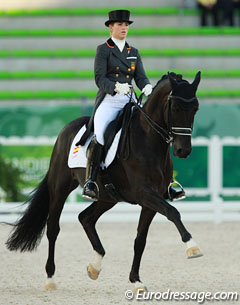 Spanish Morgan Barbançon probably had the ride of a lifetime, achieving her highest score ever at a big international Grand Prix Championships. After the Olympics, the 17-year old Painted Black went lame and it took two years for him to come back. The horse still looked very tender in the extended trots and half passes today, but Morgan rode an effortless, faultfree test. Her black stallion could be more up in the bridle, but he was obedient and willing. The piaffe and passage were rhythmical, the two tempi changes lovely and the ones outstanding. Barbançon scored 75.143% and is ranking third provisionally.

American Laura Graves and her Dutch bred Verdades (by Florett As) are now in fourth position after scoring 74.871%. Her tall bay gelding impressed in the trot half passes with his scope and reach. The first piaffe was good in the rhythm but the horse stretches the frontlegs and not really takes the weight behind. The second piaffe was the best one. In the one at X he got wide in front. The extended walk had good overtrack but the horse could have stretched more into the contect. The extended canter was big, the one tempi changes excellent. 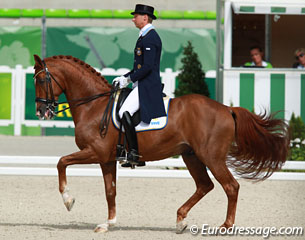 Patrik Kittel and the KWPN stallion Scandic (by Solos Carex x Amiral) is now in 7th place with 74.086%. He rode a conservative first trot extension, the other two were more expressive. The horse regularly tilted to the right and had his mouth open, but Kittel kept a quiet contact throughout. The half passes needed more crossing behind and the rein back was a bit quick, but the passage was lightfooted and very steady in the rhythm. The piaffes could have been a bit more "forward thinking" but Scandic was very consistent in the rhythm. The tempi changes were all correctly executed and the pirouettes were small. In the right one the horse dropped a bit on the forehand.