Yes We Caen: Whiteness I Remember 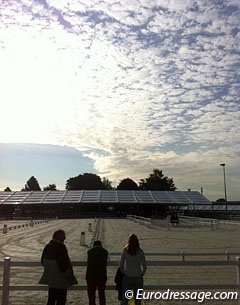 The second day at the 2014 World Equestrian Games started with me going time-deranged and insomniac. I had initially set my alarm for 6 AM so I could be at the show early enough, but I woke up at 5 AM and was happy that I still had an hour of sleep to go. At 6 AM I pressed snooze as soon as the buzzer went off. I hate the Marimbo wake-up tune on my iPhone! After snoozing for 9 minutes I decided that it wasn't really necessary for me to be at the show at 6.30 am so I granted myself another 50 minutes. Unfortunately I woke up by myself, dazed and confused thinking that I had overslep. I jumped out of bed and into the bathroom, only to realize that it was still 6.50 AM. What's wrong with me?!

After getting dressed, I went straight to my car, skipping breakfast in the hotel and just ate a not so "plum plum" (The English Patient) in my car while making my way to the show. I got there early, loitered in the press centre and by 7.40 am started heading to the warm up ring where the horse inspection would be taking place. I hooked up with Sara Lieser of the Chronicle of the Horse and a group of 20-year old eager-beaver journalists in tow (they reminded me of myself 10 years ago. Why do I feel so old this year??). After getting a warm welcome from Chris, the head of Media who orated a marketing speech in the main arena, I was at the warm up ring ten minutes later realizing that the jog was already in full progress. I cursed the failing WEG communications department for not alerting us of the time change! 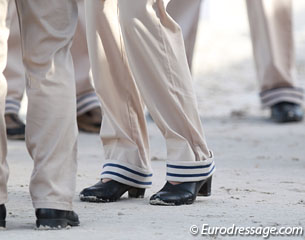 At any big show, the first few days of competition are always a bit rocky. The ground crew is trying to set boundaries and be strict, whereas experienced photographers mumble and grumble, complaining about all the limitations, restrictions, rules and regulations, which nip all creativity in the bud. It is no different at WEG, where guards were signing the absolute limits of freedom for photographers where to go. For the warm-up it totally made no sense. We were only allowed to shoot from one side, far away from the horse inspection ring, which was fenced off by a high, bright white two-poster plastic fence. It was absolute horror to shoot from that angle straight into the rising sun. Eskimos would have come up with a new word to describe the whiteness of it all. The horse inspection scenery was all whiteness: white footing, white fences, white warm-up tent in the background, white stable tent to the right and only a dot of colour coming from the horses and the green background behind the tent. It was a photography nightmare, further hindered by staffers who elbowed us back with every step we took towards freedom of creativity. After 50 horses you could hear the complaints and sighs amongst us, most of them wondering "is this what I woke up for at 7 AM?"

Quite a few horses at the vet check were absolute a**holes and I shook my head and agreed with myself, "castration is the best cure!". Taking the opportunity to behave like jerks as they sniffed freedom with no saddle and curb to constrain them, several quadrupeds jumped and bopped around like teenagers at their first dance party. Other horses were just vile, attacking their handler with bared teeth or lashing out with their hindlegs trying to kill a few judges along the way. 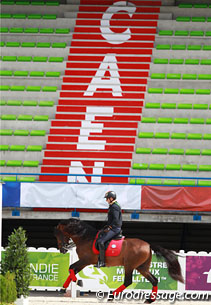 I was happy that the jog was finished round 10.30 AM. All of a sudden the guards allowed us to move all over the place --- too late -- but I was able to say high to a few acquaintances before I went back to my car to open the trunk and get a peach for lunch. The WEG in Caen is not providing any food to the press. Coffee or tea are restricted to such a minimum that only 10 people instead of 500 could survive on it. I'm glad I packed an emergency food and drink kit in my car.

The ring familiarisation in the main stadium started at 11h and I sat in on the majority of the training sessions until I called it quits round 6 PM. It almost brought me into a comatose state even though so many nice horses were being ridden. Most riders were just walking or lightly schooling their horses. The German horses looked fit, Charlotte Dujardin barely did anything on Valegro (a mild trot and canter in between a lot of walking was all that she showed). Werth worked Bella Rose on collection in the pirouettes and the piaffes. Edward Gal and Voice absolutely showed nothing in the main stadium (mainly walk and a small pony trot), Hans Peter Minderhoud had Johnson fresh and frisky, Dutch team alternate Diederik van Silfhout presented Arlando with tons of flash and expression but little relaxation in the body. Adelinde Cornelissen had Parzival much fresher than at Aachen and practised quite a lot of piaffe and passage.

I admit I did miss the last few nations but really was done with all the training. I was hungry and wanted to write my article and photo report on the horse inspection. I headed back to the hotel in the town centre, again struggled to find a parking spot and went up to my room to write the article. As soon as I was finished I went downstairs and walked the streets of Caen in search of food. 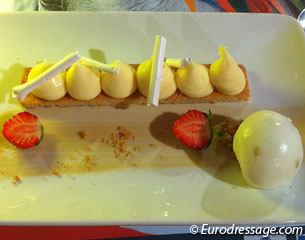 Close to the castle in the town centre I saw this picturesque alley with lot of (touristy) restaurants. I saw a German journalist colleague sit alone at a table, finishing her food and realized how lonely we all are in our job. Paradoxically I strode onwards and found myself a table for one at restaurant A L'Ours, where I had foie gras and duck roast. In between courses I enjoyed reading my book George RR Martin's Game of Thrones. I have seen all four seasons twice, but decided to read the books as well. Did I tell you I love fantasy? Even though I felt stuffed as a Thanksgiving turkey, I ignored all better judgment and finished my dinner with a delicious lemon pie. During the 1 km-walk back to the hotel I probably burnt off 20 Kcalories of the 7,5440,000,9894,0988,78987 that I ate! Why?? Why Oh why did insist on three courses?

The first group of Grand Prix riders is competing tomorrow at 8 AM. I want to be at the show by 7. Let's see what the traffic does on the first day of actual competition at the WEG.