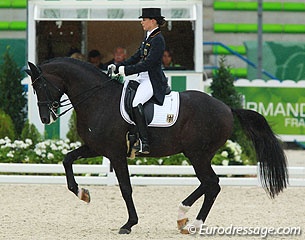 German Kristina Sprehe took a strong lead in the provisional ranking after the morning session forthe first group of riders in the Grand Prix at the 2014 World Equestrian Games in Caen, France, on Monday 25 August 2014. Sprehe is in first place so far with a 78.814%, followed by team mate Fabienne Lutkemeier with 73.586% and Diederik van Silfhout in third place with 73.414%.

The non-stop rain has not dampened the spirits of the spectators, who filled up 1/4 of the big soccer stadium. Their enthusiasm is one of a sell-out crowd. Large packs of French, Spanish and Australians are filling up the seats and cheer for bread and games like in the Colosseum. South African Chere Burger and her Friesian Anders and Spanish Jose Antonio Garcia Mena with his flea-bitten Andalusian Norte were the favourites of the pack.

The lead, however, went to German Kristina Sprehe on her Hanoverian stallion Desperados (by De Niro x Wolkenstein II). The pair was on form and showed a good, clear passage, a super second piaffe, even though the stallion was a bit hesitant in the onset of the first one . The first trot extension was a bit conservative, the other two were very expressive. The walk was very ground covering but there was a slight loss of clarity in the collected walk. The two tempi changes could have been a bit more forward ridden  and in the big extended canter he was crooked to the right. The zig zag was lovely, the one tempi changes were good and the pirouettes small. Fabienne Lutkemeier was unfortunate to draw first to go but that did not shake her. Her Hanoverian gelding D'Agostino (by De Niro x Shogun xx) produced a very solid, accurate round and did what was expected of her. D'Agostino's highlights and low points have remained the same. His trot extensions a huge, his tempi changes dead straight and his half passes sweeping. In the passage he still gets tight in the nec and behind the vertical and despite a regular rhythm the piaffe is far from what it's supposed to look like. The chestnut stretches the forelegs and takes no weight behind. Thanks to his steady rhythm he's still able to score for the movement. The pair earned a total of 73.586% with 72.100 (Clarke) as low score and 75.500 (Fore) as high score. 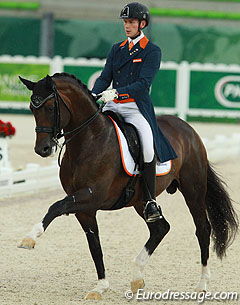 Just like Lutkemeier, Dutch Diederik van Silfhout was the team alternate who did get their chance at WEG performance after another team horse dropped out (Totilas, Siro). Van Silfhout did an admirable job on his young 9-year old Dutch stallion Arlando (by Paddox x Mytens xx). The rider sat very quiet in the saddle and he rode very dilligently. Arlando is a drop dead gorgeous horse, very expressive in trot and canter, but there were several tiny issues that meddled with a higher score. The halts were not immobile and the one for the rein back was not square. The horse is super flashy in the trot extensions but never achieves proper ground coverage and overtrack. The piaffe and passage are very lightfooted, but Arlando could take more weight on the hindquarters in the piaffe. The extended walk only had one hoof overtrack. In the two tempi changes he swayed to the right, the extended canter showed should more opening of the frame and the change at X was crooked. The ones were correct. The pirouette left was the better one of the two. Overall Arlando needs to be more relaxed in the body and swinging through the back. The horse is very gifted but there is too much tension in the top line. Van Silfhout finished on 73.414% with 71.300 (Clarke) as low score and 77.100 (Judet) as high score. 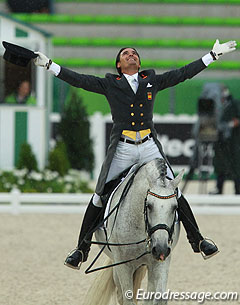 Spanish Jose Antonio Garcia Mena and the Andalusian Norte (by Cortesano VII x Aquiles III) rode a fantastic test. The trot extensions were massive for a horse of this breed and the first piaffe was superb even though there was a double beat on the exit from that piaffe. The extended walk had good relaxation, even though there was just one hoof overtrack. The strike off to canter was a bit sloppy and there was a mistake in the two tempi changes, but the ones were ok, even though the horse does not reach much under with his left hind leg in the change to the left.  There could have been a bit more jump in the pirouette to the right.  After a disappointing Special ride in Aachen a month ago, Garcia Mena made an excellent come back in Caen. He scored 72.414%.