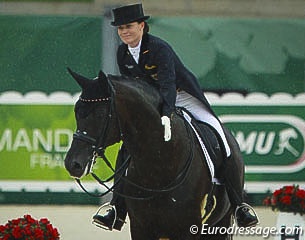 Kristina Sprehe and her team mate Fabienne Lutkemeier have put team German firmly in the lead after the first group of riders have gone at the 2014 World Equestrian Games in Caen, France on Monday 25 August 2014. Riders in the afternoon session on the first day of Grand Prix competition could not unseat Sprehe from that provisional first place, but Dutch Hans Peter Minderhoud nestled into second place with a four percent score difference.

It rained non-stop today and after the continuous drizzle in the morning it turned into real pouring in the afternoon. The footing started to suffer from the high amount of water that came down from the sky. Puddles appeared in the arena towards the end of the class and while horses splashed through the arena, the footing did not become slippery. More rain is predicted for tomorrow though. 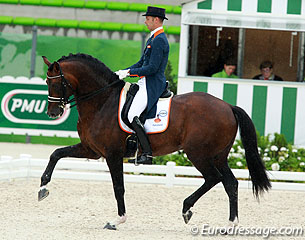 Hans Peter Minderhoud is currently leading the Dutch campaign for a team medal with his provisional second place after scoring 74.357% on the 12-year old Dutch warmblood stallion Johnson (by Jazz x Flemmingh). Minderhoud is known for his high energy, active riding and it was no different today. The trot extensions had much activity and knee action, but his bay stallion should have gained more ground in them. The half passes were huge and sweeping, but almost a bit too rushed. The passage was regular but today Johnson struggled a bit in the piaffe, getting very narrow behind and sometimes crossing the hooves, which made the horse lose the steady rhythm. The extended walk was relaxed but there could have been even more stretch. The collected walk was uneven behind with longer steps with the left hind leg compared to the right one. The canter work was solid with straight one and two tempi changes, but Johnson sometimes slightly tilted to the right. The ones were very uphill.  On the final centerline Minderhoud had good energy and expression but the horse was a bit crooked to the left behind. 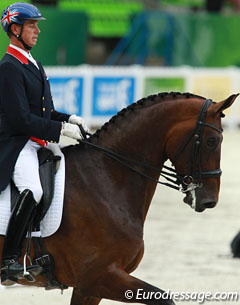 Carl Hester brought Jane de la Mare's  10-year old Dutch warmblood Nip Tuck (by Don Ruto) to Caen and did an admirable job on the green Grand Prix horse, who was liked here by the judges today. Carl's forté certainly is making dressage look easy and effortless and he did it no differently on Nip Tuck. The bay was always light in the bridle with the poll as highest point. The trot extensions were underwhelming with small rhtyhmical errors on all three diagonals. The half pass left was the better one with more elasticity and bounce. The rein back was beautiful. In passage Nip Tuck fails to move the hindlegs properly under the body, but in piaffe he makes clear efforts to sit and take the weight but the fluidity in the rhythm needs to improve. The transition out of piaffe are still a bit dodgy. The canter work was well ridden with the powerful and straight one tempi changes as real highlight. Hester scored 74.186% to finish third provisionally. 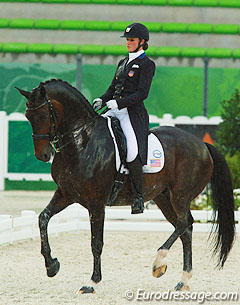 American Adrienne Lyle proved her worth on Perry Thomas' 15-year old Oldenburg gelding Wizard (by Weltmeyer x Classiker) with pretty trot extensions and lovely half passes. The horse dragged his feet in the rein back. The first piaffe-passage was nice, the extended walk decent but in the collected he became very short-long behind again. Lyle rode the piaffe and passage very carefully not to disturb the horse too much in the rhythm. In canter the pair showed a big extension, good two's but Lyle's started the one's beautifully and then a mistake happened. The right pirouette was a bit flat. Lyle posted a score of 72.00% to finish seventh provisionally.

Swedish Minna Telde and her Hanoverian Santana (by Sandro Hit x Rubinstein) stood out with their engaged trot extensions and bouncy passage, but in the piaffe the horse often ran out of steam. They earned 71.114%. Home hero Marc Boblet and the gorgeous black mare Noble Dream (by Caprimond) were greeted by a wild crowd that cheered the duo onto a seasonal best performance. Boblet was diplomatic in handling the mare's stress point, the piaffe, and the changes were clear, even though Noble Dream is shorter behind in the changes to the right. They scored 70.686%.

The Dutch team is currently on course for silver but are closely followed by the Brits.