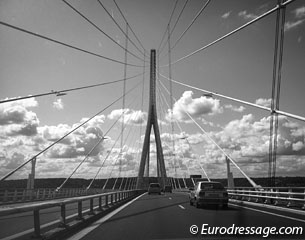 The 2014 World Equestrian Games are upon us and I can't believe I'm  attending my fourth Games as a journalist. Thirty-three going on sixty-three. It's my final competition of the season and I will take a big horse show break as soon as September comes along! I was anxious for WEG as well as looking forward to it. Last year the summer show schedule drained me mentally so I prepared myself more properly this year to be fresh and fruity for this year's battle of the titans.

Six days ago I flew to Italy and literally recharged my batteries by spending some time away from the computer (this actually means restricting myself to no more than 2 hours behind the computer per day!!). I finally read some books again, soaked up the gorgeous Italian sun and replenished my body with (too) much food and wine. I got home yesterday on Friday afternoon and my wakeup call to drive to WEG was this morning at 6 AM. I felt like a zombie, dragging myself out of bed like that famous polar bear on Youtube.

The drive to Caen was supposed to take 5 hours from Belgium to Normandy and it would have been that way apart from the obnoxious, extra 20 minute queueing at the toll booth in Le Havre. I was amazed at the amount of Belgian, Dutch, German and British cars I overtook and wondered where all these well packed cars -- most of them with junk stuffed to the roof -- were heading to. I always ask myself why people take their entire bed sets with them when they travel?! I arrived in Caen at around 1.30 PM and the GPS easily navigated me to the main accreditation centre where picking up my credentials and parking card was swift business. I was out of there in 10 minutes and the staff was very friendly and helpful. I'm quite well organized when I go on trips and hate wasting time so I was checking off my to do list for the day. From the press centre I steered my car to the hotel, which is right near the train station and on the Orne river. Funnily they only reserved a room for me for six nights instead of 8 with a break on Wednesday? Keep on smiling and believe in the goodness of people! The friendly hotel staff told me they would fix it, so we'll see. I might be sleeping in my car on Wednesday. Who knows..

It took ten minutes to get checked in and dump my suitcase there before I was off again heading straight to the epicentre, the D'Ornano Soccer Stadium, at the edge of the city where the action the next fourteen days will take place. I was able to park my car right behind the press tent, but maneuvering round the stadium was quite tricky with a lot of crazy traffic going in all directions.... and the show hadn't even started yet. My guess Caen will be total grid lock the next few days! The press centre is quite big and very typical: large tables, plastic seats, no frills, and just tea and coffee thanks to sponsor Alltech (but only in exchange for a business card, said the friendly hostess).  I caught up with a few German, Belgian, Dutch and British colleagues and then went exploring the terrain. 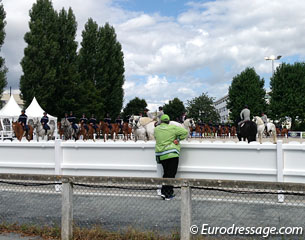 The soccer stadium has been nicely but modestly decorated with green banner with the offficial logo and colours, as well as numerous flags. The arena immediately felt similar to the one at the 2013 European Championships in Herning, where the colour red dominated. This time it will be green. I remember Herning was tricky to photograph so I'm bracing myself for Monday.

Two weeks ago I picked up the rumour that the press would not have any access to the warm-up arena and it truly made my sigh. This battle for transparency in the sport has been on-going and it's just so fatiguing to have to fight for openness and proper visibility of all aspects of the sport over and over again. I contacted the FEI at beginning of August and quickly received this reply from the Lausanne headquarters: "The Organising Committee of the Alltech FEI World Equestrian Games™ 2014 in Normandy and the FEI have worked together to make public access possible, but unfortunately due to the existing compact venue constraints, security and spectator flow issues, the public will not be able to access the warm-up arenas. At Stade d’Ornano dedicated areas have been set up for accredited media from where they will be able to observe the warm-up arenas." A German journalist told me at the press centre today that we are not allowed to get anywhere near the warm up ring, but the proof of the pudding is in the eating and I'll find out myself tomorrow!

Today I was able to walk all the way to the warm-up ring with no ring steward nor official turning me 180° in the opposite direction. There were no dressage riders in the warm up ring, except for an entire police squadron, one percheron and one Cadre Noir rider waiting to enter the main ring to rehearse the opening ceremony. Have I told you that I'm totally not into "horse related shows" nor opening ceremonies. I prefer to skip them and use that time wisely to soak up some local culture. 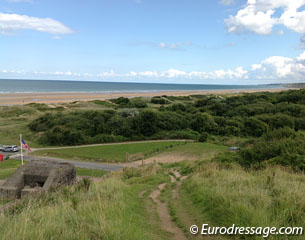 Round 15h I headed to my car to achieve something grand. I finally strike something off my bucket list: visit Omaha Beach. World War II has been a huge part of my family's history with my grandfather's house (and my homestead) being occupied by the Germans as local headquarters. My grandfather was obsessed with the war, collected Nazi and Allied Forces' memorabilia and he passed on this interest in the war to his grandchildren. My grandmother's family hid British and U.S. parachutists, who missed their landing spot, and sent them back home via the Resistance. I have read quit a lot of war books (including Antony Beevor's epic D-Day) and seen many war movies (even a hidden treasure such as Tora! Tora! Tora!). Anyway, with WEG in Normandy I just HAD to go to Omaha.

It's only a 40-minute drive to St. Laurent sur Mer, which is the middle town of three small villages that make up Omaha Beach (Vierville sur Mer is probably best known). I parked my car, walked to the war monument and the edge of the beach and looked at the Ocean. I really wanted to feel or experience the effect of what that zone of total horror and death but also liberation would do to me but I was shocked and disappointed. The ocean was beautiful, more blue than I thought. The beach was huge, with cliffs only on the edges of Omaha. So much space for so many troops to land. The dunes, where the Germans were bunkered with their cannons, were filled with ugly houses. The beach itself was covered with tourists, walking their dogs, playing in the sand, licking ice creams and making fun. I felt like screaming at them, get off the sand, you are trespassing and disrespecting a grave.. I wish the beach had been kept intact, just for people to look at and understand its historic value. All of that seemed forgotten and was now  just a play ground. I was quite surprised by my own emotions. 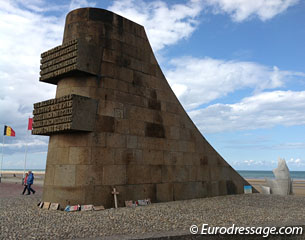 I was trying to spot the German bunkers but could see none, so I quickly jumped back into my car and drove along the coast until I found them, at least one. The concrete bunker will still intact with the disabled cannon inside and it served as a monument. I climbed the dunes and found another smaller bunker in the bushes, shrub had covered it all up. There must be more like those, but seem totally invisible because of the wild growth and holiday homes on the coast line.

Part of the Omaha experience is also visit the Normandy American Cemetery and Memorial in Correville Sur Mer. It is also on Omaha Beach and when I got there it was like I entered a Six Flags amusement park. Cars queueing to find a parking spot, ushers helping you in the right direction. Hordes of people getting out and moving like a mob to the visitor centre with its beautiful, serene cement architecture and infinity pond. 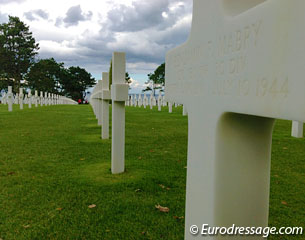 The cemetery is breath taking (in the ethicly correct sense); so many crosses, so many dead, so many who have died for European freedom and a (Western) world free from tirrany. The cemetary was grand, with its magistral view over the Atlantic ocean, thousands of Christian crosses and some with the star of David. The only fact I really disliked was that there were too many people to really experience the tragedy and sadness of it all. I got that effect more when I visited the German (!) war cemetary in Lommel, Belgium. Still, I'm so happy to have seen the place and have those crosses etched in my memory.

From the sadness of Omaha I went to a happier place, Bayeux, to see the legendary 70-metre long Bayeux tapestry which depicts the Battle of Hastings by William the Conquerer in 1066.  I parked my car somewhere in the city centre and walked towards the cathedral where I thought the tapestry was displayed. It was not, but fortunately there were plenty of signs pointing me in the right direction. Bayeux is lovely town with lots of mediaeval buildings, cobblestone streets, a river running through it, cute shops and a grand cathedral. The museum with the tapestry offers a super audio-tour which is interesting and not too long (which usually turns me off from using the audio-phone). I also browsed around in some arts and crafts stores and went for dinner. My first bit of what was supposed to be decent food that day. 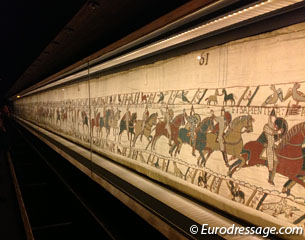 I went to Restaurant La Masala near the Cathedral. There were some people inside and the menu showed some traditional dishes. I chose salmon with a scallop carpaccio as a starter and mussels as main course. The starter was simple but nice, the main course not a recommendation. The mussels were small, there were hardly any vegetables in the pot, and in France, they had never heard of "mussel sauce" (which is a musterd based sauce that goes great with mussels). The waitress said the sauce was at the bottom of the pot, referring to the 1 centimeter left over water which I don't drink (some people do, nothing wrong with that). Not entirely happy with my dinner I tried to fix it with dessert but got a piece of industrial, micro waved apple pie. I promised myself to do better tomorrow and research restaurants before I pick one on the go.

It will be a very early wake up call for me. I'll try 6 AM so that I can be at the show well ahead of time (to beat the traffic) for the 8 AM horse inspection!