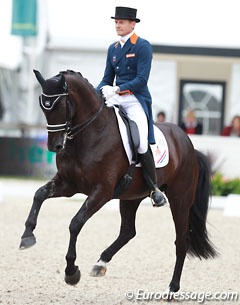 With two more days to go until the horse inspection at the 2014 World Equestrian, Games, the Dutch team suffered a serious blow as  two of its top team horses have been withdrawn: Undercover and Siro. Both horses are injured and not fit to compete. They will be replaced by Voice and Arlando.

At the team training, Undercover was still fit on Wednesday but "moved awkwardly," as the horse's Austrian owner stated in a press release. "The vet diagnosed a problem in the cervical spine. Despite the fact that the physiotherapist was able to mobilise the vertebra, a slight inflammation is still causing pain for the KWPN gelding."

“This must have happened after the team training in the paddock or in his box. It is something, which can be treated well by means of corresponding medication and will heal within more or less one week. In order to save him from pain and avoid risks, we have decided to have him now treated by the vet. Fritsie will now stay at home in The Netherlands. We are really very sorry but to us the horse’s well-being is more important than success," said Edward Gal's business partner Nicole Werner.

Gal will still compete at the World Equestrian Games but with his second horse, Voice.

Danielle Heijkoop and Siro were also forced to withdraw from the team as the Dutch warmblood gelding is injured as well. Siro missed the 2014 CDIO Aachen too due to two hoof abscesses but apparently recovered from those. At a Dutch vet check yesterday he was not fit. "The Gribaldi son probably knocked himself in training," the Dutch Equestrian Federation stated.

"It's an enormous blow," said Dutch team trainer Wim Ernes. "But a team formed by two reserve combinations as well as Cornelissen with Parzival and Minderhoud with Johnson still have medal chances."