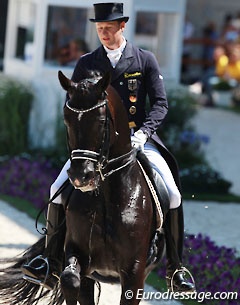 Breaking news has just arrived from the German Equestrian Federation. Matthias Alexander Rath and Totilas will not be competing at the 2014 World Equestrian Games in Caen, which start on Monday 25 August 2014. The 14-year old black stallion has injured himself and is not fit to compete.

Rath and Totilas made a sensational come back in May 2014 after the 2010 World Champion horse was sidelined due to injury for two years. The pair won all classes at CDI's in Kapellen, Wiesbaden, Perl and Aachen, but was surprisingly withdrawn from the Aachen Grand Prix Kur to Music in order to spare the horse for the 2014 World Equestrian Games.

Unfortunately, the 14-year old Dutch warmblood stallion by Gribaldi x Glendale is not fit to compete.

"Totilas and Matthias Alexander Rath showed impressive form at the German training camp at Gestut Peterhof but right before the team's departure to France, Totilas knocked himself against an exisiting splint and had a painful reaction," the German federation stated in a press release. "After intensive consideration between the team management, the team vet and the rider, it has been decided to withdraw Totilas from WEG participation."