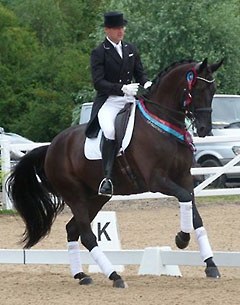 In a nail-biting climax, Hickstead CDI3* hosted the final qualifying leg in which top international dressage partnerships battled it out for a place in the Mount St John Dressage Future Elite Championship at this year’s Horse of the Year Show (HOYS).  Following top performances from all riders, the final six spots for this year’s final, which will be held at the NEC, Birmingham, on Friday 10th October, have now been confirmed.

Anders Dhal (Selten HW); Spencer Wilton, who has qualified both Alfons and Zamboucca, and Matt Frost (AMD Don Rosso II), have already verbally
confirmed their intentions to compete in the Mount St John Dressage
Future Elite Championship at HOYS. Qualification will move down the line
if there are any non-acceptances.

The final standings for the Mount St John Dressage Future Elite Championship are as follows:

Just six automatic qualifying places are allocated for this prestigious event, showcasing the top up-and-coming dressage animals in Britain, gained by averaging percentages gained at British Dressage Premier League Shows and domestic CDIs. A further two places will be offered as wild cards, the recipients of which will be determined by Horse of the Year Show and British Dressage’s senior selection committee.

Helena Pettit, Managing Director of HOYS organiser Grandstand Media Ltd, said: “We’re so pleased the Mount St John Dressage Future Elite Championship was such a success in 2013 and is now evolving into a national final showcasing our exciting dressage talent. We’d like to wish the final six, and the soon-to-be-announced wild card combinations, in contention for the £2,000 first prize the very best of luck.”

The six finalists, and two wild card combinations, will perform the Intermediate I Freestyle Test to Music in front of a packed house and three international judges, including FEI Dressage Judge General, Olympic Judge and Internationally renowned trainer Stephen Clarke.

The Mount St John Equestrian team breeds from only the top sporting bloodlines in the world. It focuses on using top class mares and selecting the best European stallions to suit, therefore building a strong foundation on which to breed the next generation of future elite dressage horses.