David Stickland: Spinning the Numbers for the 2014 World Equestrian Games 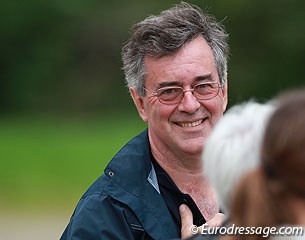 With just a week before the WEG gets underway I’ve been checking out the numbers in the GDA database to see how things might pan out in the Team and Individual competitions. The goal is not to make the actual competition uninteresting but to make it even more exciting by pointing out the possibilities and perhaps where the surprises might come. To do this I analyze the history of all the combinations and for the top combinations their strengths and weaknesses and their progression over the year in the principle movements.

Of course, luckily, it is sport, there are two athletes out there in each combination that can have good or bad days, but on the whole combinations don’t do much better than normal in any given competition, though things can of course go wrong in big ways.

The Team event will be decided by the sum of the best 3 rides for a country in the Grand Prix. This time around (unlike in London) the 3 member team does not need to be declared before the competition, it’s the standard CDIO format where the best 3 of 4 counts. Also unlike London, the Special is for the Individual medal and does not contribute to the team score.

The whole dressage world knows that it is almost inconceivable for GER not to win the Gold medal this year! The depth of talent in the DOKR riders and horses is formidable. They will be fielding 4 combinations all of whom have gone above 80% in the Grand Prix. If they lose completely even their top combination they can still end up 5-6 points clear of their nearest competitors. The only plausible way for them not to be on the top of the podium is to have two of their riders eliminated, nobody on the planet could want that, so they seem to be assured of reaping the benefits of their immensely strong Dressage program.

This year round NED looks to be safely in Silver position with a 5-point lead over GBR, they also have two combinations that can perform over 80%. But, if they lose one of those riders, then they go dead-level with GBR for a Silver/Bronze fight. GBR however has one really strong combination, they should be safely in Bronze position, but the weight of the team success rests on Charlotte’s shoulders. Any problem there and they would almost certainly drop out of medal contention.

And waiting to fight it out in 4-6 position are three very close teams, SWE, USA and DEN. If Valegro goes according to form, it is not likely that these three will be in the medals, but SWE and USA are almost level and ready to step in if GBR has any slip-up. If Don Aurelio and Scandic come out at the top of their form and Santana or Darcia hit their top too, then they can get within a couple of points of a plausible GBR score. They have everything to go for. By the same measure Legolas and Verdedas are on a steep curve of improvement and right on the threshold of the podium too.

With Digby out of retirement for this competition, DEN has also put its best team forward and they can also be very close to SWE and USA. The USA had  a set-back with Steffen’s illness before Aachen, but he came out well in Verden and  Laura Graves’ rise has been meteoric. I think the motivation for these three teams is immense and the competition will be exciting to watch, they have to be at their best, because if GBR has any problem, then one of them gets to the podium and books their tickets to Rio 2018. 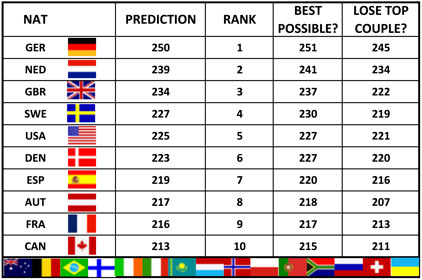 So, what about the Individual Competition? This is decided just on the Grand Prix Special and will be between the top 30 riders from the Grand prix, there are no limitations on the number of riders per nation that can do the Special. I think it is going to take around 71.something, maybe close to 72, to qualify for the Special, so it is going to be a very select club in this competition. The Special has even more weight on the Passage-Piaffe-Transitions (PPT) than the Grand Prix so this is going to tip things slightly in the favor of those horses with excellent PPT. The top 10 riders coming out of the Grand Prix are likely to be dominated by GER again, there is a good chance that all 4 Germans are in that group, 3 Dutch and one each from GBR, SWE and AUT. But the podium is much more difficult to predict! Valegro, Damon Hill and Totilas must be favorites but Bella Rosa, Undercover and Parzival will be fighting to step up onto the podium too! Before Aachen, I don’t think we would be having this discussion, but after Aachen everything is possible. I wrote an article for the WDM magazine in February fantasizing about the impossible duel between Edward and Charlotte on Totilas and Valegro, but reality caught up with my article, the duel is real but it is Matthias who brings Totilas to this competition not Edward. I think Valegro is still the favorite to win, but lets look at the details and see how this can go. It won’t be a two-way competition, Damon Hill is a force to be reckoned with, and Edward’s new horse Undercover has some magic movements too.

As the table shows, each of these top horses has different strengths, no single one is the best in everything, Damon Hill comes out top on paces and submission and has the most spectacular walk; Valegro in trot, changes, impulsion and submission; Totilas in pirouettes and impulsion; Undercover in piaffe and transitions; Parzival in changes, Bella Rosa in any half-pass. We are used to the idea that there is a champion, but the reality is different, they are all very close at the top.

By the way, if one single horse had all these best qualities we would see a score of about 88.5. 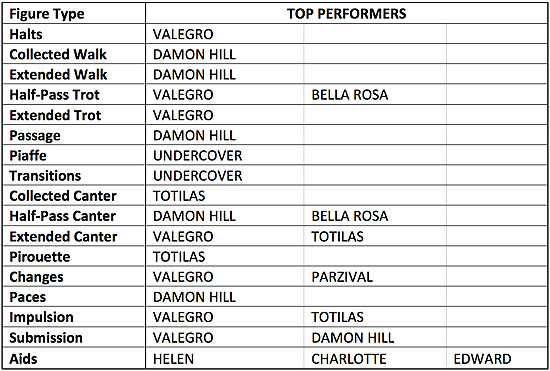 The Top Performers for each of the Grand Prix Special figure types, where more than one name is shown they are equal top!

My final prediction for the Individual medals: Valegro, Damon Hill, Totilas in that order! The numbers come out that way and I personally appreciate the harmony that Helen and Damon Hill show, so I sort of hope it works out this way too. 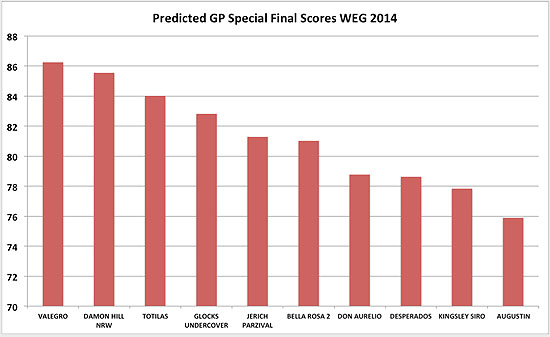 By David Stickland for Eurodressage