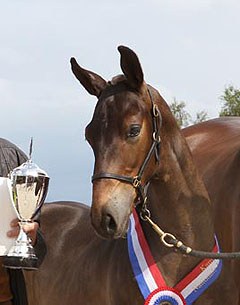 The dark bay colt Jambeau (by Apache x Hitchock) has been named champion at the 2014 KWPN Foal Championships held during the KWPN Horse Days in Ermelo, The Netherlands, on Friday 15 August 2014.

Jambeau is bred and owned by A. van Erp from Heesch, The Netherlands, and is out of the keur sport mare Nomiek.  Chair of the jury Petro Trommelen praised the colt for "moving with a very beautiful front leg and staying closed behind in the hind legs. He has much suppleness, also in canter."

The reserve champion out of 10 foals selected for the champion's ring was Just Wimphof (by De Niro x Riccione). This colt moved with much lightfootedness, ground cover and it cantered with much suppleness.

The third placed foal was filly Johanna Sollenburg (by Charmeur x Fidermark). She moved uphill with much cadence. Charmeur had no less than 5 foals out of 10 in the champion's ring