Austrian Team Selected for 2014 World Equestrian Games, Not Without Controversy 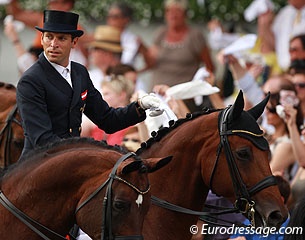 The Austrian Equestrian Federation and its dressage chef d'equipe Diana Wunschek have officially presented the team that will represent Austria at the 2014 World Equestrian Games in Caen, France, at a special press junket held at the Lusthaus in the Prater in Vienna. Austrian WEG team selection has not been without controversy as Christian Schumach was selected instead of Evelyn Haim-Swarovski.

According to Wunscheck, Austrian team selection criteria were established "at the beginning of each year in accordance with the executive board, the director of sports and myself." For the World Equestrian Games, Austrian Grand Prix riders had to compete at two international shows held in Austria selectable from a given list and at two international shows aboard of at least 4* level. "The minimum score had to be four times 68% in the Grand Prix," Wunschek added. The deadline for qualification was 21 July 2014.

Wunschek gave Eurodressage the following statement on her and the federation's team choice:

"As up to this date Mr. Schumach has ridden all 4 shows in the specified manner and Mrs. Swarovski has ridden only 2 of the shows in Austria. In Munich she started in the 3* Grand Prix (which didn´t count) and Mr. Schumach in the 5* GP. In Aachen Mr. Schumach rode also 5* and there it is, I think far more difficult to get good scores as elsewhere."

"Even if otherwise communicated in the press and elsewhere, the show in Cappeln was not, and never declared as, a mandatory show. It was fitted into the FEI Calender only after June 1st.2014, and  it took place 10 days after the deadline of qualification." 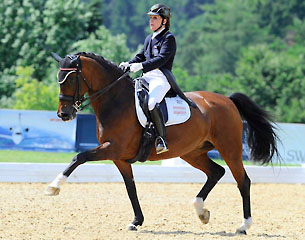 "Adding up and taking the average of all the scores (with and without Cappeln) ridden by both riders, clearing the scores by taking away the highest and the lowest score of each show, taking the Austrian Dressagelist, the Austrian Ranking list and the FEI Rankin glist into consisderation, in all of those facts Mr. Schumach is ahead from Mrs. Swarovski. Also if adding up the scores of GPS or Freestyle."

"As Mrs. Swarovski did not fulfill all the criterias (4 shows up to the deadline), and taking the scores into consideration the decision I had to make, was to nominate Mr. Schumach into the team"